Space opera, Regency romance, and an invitation to an Imperial ballroom among the stars ...

Captain Catherine Everington loves her starship, her crew, and their mission of interplanetary exploration. New worlds beckon, and Kit's always wanted to discover them. But a summons from her mother brings a reminder of Kit's family obligations, including the title and place she'd once given up among glittering Regency society, on the capitol planet.

The Regency is ending, and the new Emperor will take the Galactic Throne, which means he'll need to choose an Empress. But Arthur has never been a conventional heir, and he's fascinated by discoveries and languages and new frontiers. And an unconventional starship Captain with a love of the unknown might be exactly who he needs ... 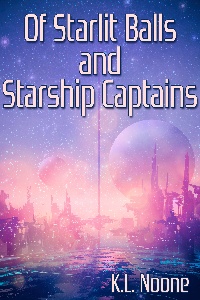 Lady Elise eyed her daughter with steel behind blue-and-silver bejeweled eyelashes. "I do know it's quite a current trend for ladies to slip on trousers and run corporations and even join the Fleet -- and don't think I've not heard that you've inspired them -- but, Catherine, you've made your point. You needn't run around in the dirt of strange planets any longer. We all know you can, if you so desire; you're perfectly capable of whatever you'd like to achieve. So you're welcome to return home for the Emperor's celebration gala." In that voice the words welcome to became an order. Not to be disobeyed.

"Mother --" But it wouldn't do any good. Hadn't on any of the countless other occasions, over the previous ten years. The chair curled itself more closely around her.

Changing tactics, perhaps. Kit tried, anyway. "We're half a galaxy away and busy, we've got three more worlds to survey, we can't just call off the mission for a celebration --"

"Darling, it's the end of the Regency!" Her mother spread both hands: can't you see it? "It's positively historic. Our new young Emperor finally of age -- it has been nearly twenty years, and we've had those six old men bickering with each other for so long about what's best for the throne, so this will be the beginning of an era…I wonder what he'll wear. His uncle Pericles always favored reds, with that overdone gold embroidery ..."

"He'll wear clothing," Kit said flatly. "Mother, you don't need me there. I only ever embarrass you."

"Of course it is, but you don't have to say it." Lady Elise sighed. "Catherine, we are one of the leading families of the Empire, like it or not, and you are the only child of the Fourth House. Your absence would be remarked. But it won't be."

"Because I'm going to the celebration ball."

"Precisely." With a head-tilt, contemplative. "You ought to wear blue. Or green. You look lovely in green."

"Of course it does." Those sapphire-blue eyes, a shade poets had once committed sonnets over, looked surprised. "The trend-setters, the dressmakers, the tailors, the weavers ... the merchants who import various dyes ... the murmurs in ballrooms, in palaces, whether you've worn this color or refused that favor ... it all leads somewhere, Catherine. How many times have I told you?"

"Enough," Kit said, and instantly felt guilty, that undefined sense of generalized shame that came along with her mother's beauty and political acumen and precisely calculated raptures over a bolt of new chiffon. Lady Elise was in many ways everything her daughter was not; and even Kit sometimes forgot as much, fooled along with the rest of the universe by the spun-sugar smile.

She said, not precisely an apology, "You think it will be noticed, then. If I'm not there."

Her mother waited, eyebrows up.

"The celebration is two weeks from tomorrow. You'd have more time if you'd answered my earlier messages."

More guilt. Kit shoved it down. She'd not been precisely ignoring said messages, only ... putting off returning the call. "We'll ... try. All right?"

"Wear your hair long if you can. Softness happens to be in style this Season, not that anyone truly believes anyone else's appearances of innocence, of course." Elise thought this over, and added, "Particularly not Lady Patrice. We all know she's sharing Regent Lancel's bed, and honestly, showing up with that undone hair and those dewy cheeks and those protestations of purity is all in such poor taste. At her age, too."

Lady Patrice happened to be Elise's friend, or as close to the term as possible. Kit chose not to mention that her mother was the same age, minus a month or two. "This is as long as my hair gets, Mother. And you don't actually expect the new Emperor to look twice at me. Besides, the poor boy will have just claimed his throne. You can't imagine he'll be hunting a spouse on the same night."

"He might," Elise observed, implacable. Kit glanced out at the stars for support. The new Emperor was luckier than he'd ever know that her mother was ineligible as a future Empress, given the need for an heir.

"I'm not planning to seduce him. I'm going to meet him, congratulate him, and smile. And then leave."

"Seduce him -- honestly, Catherine. You make it sound so calculated."

"Please refrain from discussing sexual conduct in front of the Emperor." Elise paused, thought for a second, then conceded, "You may do it, however. If he shows any interest."

"Bright stars," Kit said, with feeling, and buried her face in her hands.