One Human Loving Another (FF)

Overwhelmed by the COVID-19 chaos in her hospital, ICU nurse Melissa is comforted by newly-arrived travel nurse Courtney. Drawn to Courtney against her better judgment, lonely Melissa manufactures ways to spend time with her, and is encouraged by Courtney's obvious determination to woo Melissa, especially when she learns that Courtney did not volunteer to help out for purely unselfish reasons. After Courtney confesses she is looking for a partner and it appears she is very interested in Melissa, both are highly tempted to throw caution to the wind and see where their mutual attraction might lead.

Both know all too well the dangers involved in letting their guard down, so the two nurses strictly adhere to social distancing rules even outside the hospital. But keeping their distance physically becomes harder and harder to do as they get closer emotionally. One night Courtney shows up unexpectedly at Melissa's apartment. Will Melissa be able to ignore the virus and just be one human loving another? 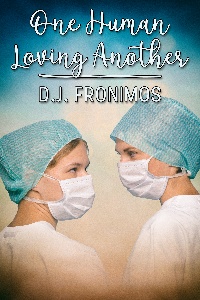 One Human Loving Another (FF)

Melissa donned her shoe covers and yellow gown and went in to check on her new patient. Joe's body was gone and there was an old woman in his place in room 6. She was refusing intubation and probably wouldn't last the night. Don't get too attached to this one! Fortunately, the woman was so short of breath there was no real conversation, just the usual, "Do you need anything? Are you having any pain?" assessment all the conscious ones got. Other than greeting her, Melissa avoided calling the new patient by her name. It was better that way. She'd give a hundred percent as always, but wouldn't get emotionally involved. Melissa just hoped she wouldn't have to help her Facetime with her kids.

Walking past room 8 on her way to get some meds, Melissa overheard Courtney talking to the patient being wheeled into the room from the ER. The patient had a terrified look on his face and Courtney was holding his hand while the ER nurse pushed the stretcher and gave an impersonal report on his condition as they walked. Soft as Courtney's voice was, it carried to Melissa over the monotone of the ER nurse, and she couldn't help eavesdropping.

"Paul, listen to me. You're just here for a little temporary help while your body fights. You can beat this, I know you can. Just look at you! Football? Soccer?" The young man rasped out a word Melissa couldn't quite catch, but she did see his eyes light up. "Ah, I knew it! My brother is into Parcours, too! You've got to be a little crazy to do those stunts, but clearly you have to be tough as well. You're going to be fine, I know it! The doctor is just going to give you something to make you sleep while your body heals. And when you're feeling better, I want to see you do some back flips down the hallway, you hear me?"

The man lay still and closed his eyes, seeming to breathe just a little easier.

"Wow, I'm impressed." Melissa moved closer to Courtney, who was watching from outside the glass doors while someone from Respiratory did an assessment on her patient. "You really think he's going to walk out of here?"

Courtney's eyes met Melissa's. "Hard to say, but the odds are against it. He's diabetic and has a congenital heart defect. You should have seen his mother begging to come up with him. Nearly broke my heart, watching her say goodbye. I think she knew it might be the last time she saw him."

Melissa leaned back against the wall. "How could you sound so positive to him? Shouldn't he know the truth?"

"What good would that do? We don't know how things are going to turn out. I'm not about to make potentially his last memory a horrible one. Maybe his body can fight. Who am I to say?"

"He was really fit -- for someone so sick, that is. Is your brother built like that?"