After her engagement falls apart just before St Valentine’s Day, Anemone Rose has an unpaid-for party and one hundred red roses going spare. Enter Will, Nick and Dan, who are not quite who they say they are, not where they ought to be, and not even what they claim to be.

Nevertheless, these three blond giants have a proposal. They will take the roses off her hands. In return, Anemone may choose one of them as a substitute for her errant fiancé. Oh, and she’d better find two other lonely ladies—one each for the men she doesn’t choose. That’s only fair!

Anemone chases them out of her shop with a mop and a bucket of water.

That’s when she remembers Penny and Angel, whose delivery she messed up when her fiancé was messing her about back in November. Could they possibly be in the market for two men armed with thirty-three red roses and a naughty disposition?

With hours to go before the men’s deal is off the table, Anemone heads to Mother Goose Lane for a crisis meeting with two women she barely knows. 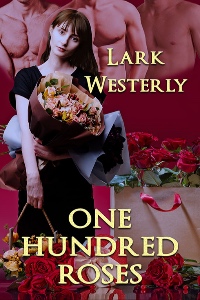 John Folly hung up the phone. He still thought of it in those terms, although he supposed the modern term was ended the call. He remembered the days when making a call meant telephoning the exchange.

Don’t think about that.

He brought his mind to bear on the current situation.

“Who was that my love?” his wife asked.

Linneas sipped her tea. “I gathered what it was about, just not who was calling. My hearing isn’t quite what it was, you know.” She looked up at him and he thought affectionately that her hearing might not be one hundred percent, but her mind was as clear as ever. She went on, “That’s three calls you’ve had from three different people, all about the same situation. What are you going to do, John?”

“I’m not sure it’s my place to do anything. If anyone, it’s Sixten’s place—”

Linneas got up and put her arms around him. “Darling John, if you feel concerned, it is your place to act. Six is—Six. I love him, of course, but he’s never had quite the gumption I have. If I’d taken his advice, I wouldn’t have married you.”

“I never knew about that,” John said.

“Beloved, there’s a lot you don’t know, and most of it is things you don’t need to know. Six likes you—he always did—he just thought it was something of a misalliance. The age difference, you see.”

John said, “I can see his point. But he’s never been less than cordial to me.”

“I’d have disowned him in a heartbeat if he had been.” Linneas leaned her head against John’s chest, and he tried not to feel the fragility of her shoulders. Some women ran to plumpness in their eighties. Linneas was not one of them.

“I’m so glad Six’s family, as well as our own, will always have you to care for them,” she said.

And it won’t be for always, exactly.

“You care about them,” she said gently. “Six does, too, but not in the same way you do. Neither is he placed to be there for them, the way you have been and will be.”

John kissed his wife’s head. “I love you, so much, Linneas. You’re a good deal wiser than I am.”

She scoffed gently, disengaging herself from his arms. Then she said, “I repeat, what are you going to do?”

Linneas grinned—the same merry crinkle to her eyes that he’d loved for sixty-three years. She made a grand gesture. “Release the Paladins!”

Anemone Rose leaned her elbows on the industrial-sized stone sink in the back room of Vouch-Safe Roses.

She thought she should be sobbing, awash with tears and running through the paper towel as if there were no tomorrow.

Instead, she was just so…mad.

Engagement celebration on St Valentine’s Day. You have got to be joking.

She wanted someone to bite.

Everything had fallen apart a few days before, but a broken engagement was the gift that just kept on giving.

The shop bell sang its random rose song of the day. “Love is spelled R-O-S-E-S,” by Pickle Me Balls.

Who the hell put that one on the playlist?

Who is that? What part of Closed do they not understand?

Right. Whoever that is, is going to get toasted.

V-S Roses wasn’t entirely her business, but it might as well have been. The Vouch-Safe company had bought into Rose Roses several years before when a small gentleman with a powerful personality walked in off the street and asked to speak with the manager.

Anemone was it. At the age when her contemporaries were still walking the wild side of their teenaged years, she was also the owner, the assistant, the florist, the buyer and the breeder, and sometimes it got her down.

The gentleman, for Anemone hesitated to term him a man, exactly, introduced himself as Geraint Trip. He said he represented a company called Vouch-Safe which provided vouchers for magical, marvellous, chance-of-a-lifetime experiences.

Vouch-Safe, he further explained, had folk it called providers, who helped to facilitate the experiences.

“Such as?” Anemone asked. She went on trimming excess stem from a bunch of yellow roses.

This sounded like a con to her, but Mister Trip didn’t look like a conman. His mild eyes, peering at her through round spectacles that didn’t look quite right, radiated honesty and kindly interest.

She supposed the best conmen did that too.

“Just as well I’m not selling, then, Ms Rose.” He was small and slight, but he had a good deal of presence and a devastating smile. He wore a gold ring on his wedding finger. “By the way, will you feel more comfortable if I tell you I know your grandfather?”

“Sixten Rose. I am also quite well acquainted with his sister Linneas.” He paused and then added, gently, “and with her husband, John, who was friends with my great-grandfather back in the day.”

“I see.” Anemone felt a stab of unease. Great-Uncle John wasn’t a secret, exactly, but most people who met him for the first time supposed he was Great-Aunt Lin’s grandson, or possibly her toy-boy, and that his name and birthdate on genealogy sites referred to some much earlier John Folly. His children, her dad’s cousins Rose Tambour, Erica Damask and William Folly, looked younger than they were, too. Rose was forty-something, but she could easily have passed for thirty.