Orange You Going to Kiss Him (MMM)

If absence makes the heart grow fonder, what does togetherness do?

When Casey found himself falling in love with Eli and Johnny as they fell in love with each other, he fled the country. Upon his return four months later, he finds Eli off in Morocco for humanitarian work and Johnny all alone.

Forced together over the holidays, Casey and Johnny find the situation tense. But what kind of tension is building? When Eli comes home with a big reveal and a plan, where will that leave the three of them this Christmas and in the future? 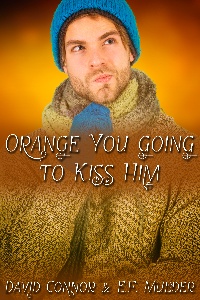 Orange You Going to Kiss Him (MMM)

Two things were waiting for me when Eli and I arrived at the rehab center the following day after getting my cast removed. One was a package. The other was Casey who held it.

He stood to offer hugs. “I missed your sleep sounds last night, J-Yo. I missed you.”

I touched Casey’s neck, afraid to go near his cheek.

“Not really. Warmth, I guess. But there’s not much sensation, and I still can’t really sign.”

Casey looked to Eli, who repeated what I’d said -- what my mind said -- almost verbatim, despite my fingers’ errors. “This will help with all that.” Eli picked up the box.

Do not open until we get there, was written across it in red ink.

“Have at it.” Eli handed over the gift.

“A puzzle.” I had a feeling before we tore into the box.

“A good shake tipped me off,” Casey said.

“It’ll give you something to do together. To help Johnny’s fingers get back to normal.”

Working jigsaw puzzles had been one of the physical therapist’s suggestions for working on my own. Fate again, I thought.

“There’s no picture on the box to go by.” Casey turned it upside down.

Though I’d never heard snark, I was pretty sure that was some.

Eli smiled. “You’ll see. Sit and get started.” He turned toward the doorway. “There’s Bette. We’re going to catch up.”

Casey tore into the puzzle box, and within a couple minutes, “This piece looks like it will fit with yours.”

I’d been holding the same one since the pieces were first dumped out onto the big table. “Maybe.” I held it up, and Casey brought his close. Sure enough, they went together.

“Father has nothing to do with it.”

Having glanced away, I missed Bette’s side of the suddenly heated exchange. Because Eli always spoke in voice and sign when I was nearby, his response drew my attention.

“Eeyore ... I think you should tell him what you have planned.”

Eavesdropping was easy once I made an effort to watch lips.

“I remember you taking me out to look for Santa up in the sky. The gazebo would be wrapped in a million lights and the lake would be all shimmery.” Eli’s jazz hands drew attention from others in the room. “It would make a beautiful setting for a February wedding.”

I wondered if Eli wanted to marry me on Valentine’s Day.