It’s Christmas Eve and it’s snowing, but at least one creature is still stirring: a tabby cat with white paws named Otis. He’s protesting from his carrier in the backseat of a rented Kia, en route to a veterinarian clink. Otis is neither ill nor in need of vaccination; Jaston Calderone has come out from assisted living to tie what few loose ends his gay son Mitchell’s suicide left behind, and one of them is Otis.

As the wind whips up bluish columns of white, Jaston navigates the clogged streets in a town he doesn’t know, looking for someone to swiftly euthanize Otis. He doesn’t suspect something spectral is already at work ... that a guardian angel has crafted a plan not for Jaston’s redemption, but for Otis. 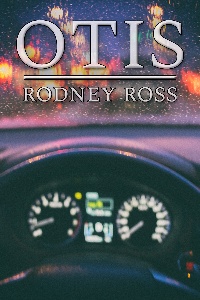 The rippling veil of snow parted to grinning whiskers that crisscrossed the pointy tail of a dog on the lit placard. The building was T-shaped. In an attempt to render the clinic's painted cinderblock homey, awnings had been appended but, removed for winter, their frames looked like cold bones ready to snap, clanking with every gust.

He left the Kia running, the cat inside. His dismayed exhale frosted the glass of the front door. A cardboard clock with orange hands hung from a small suction cup; staff would return in one hour, by nine P.M. Above it, a wreath with an unraveling red bow banged when the wind looped through.

Inside, though, he saw a woman wearing a white smock, white jeans and white sneakers, making the long red hair puddle on her shoulders that much more vivid. She was tending the curved reception desk with an antibacterial cloth. He pounded with a solid fist, sure she'd become inured by the wreath's tat-tat-tat.

She acknowledged it with the slightest pivot. "Bear with me" she seemed to mouth.

He wedged his bare hands under his arms as she unlocked the door.

"I'm sorry to interrupt your break," he apologized. "I have a cat out in my car."

"Our last vet left. One's on-call. How reliably he answers his pager tonight I can't promise. Is your cat in distress?"

He paused. "This isn't specifically medical."

She blinked. "Does the cat have a name?"

He moved quickly, coming back inside with the hard plastic carrier. He rolled it on its casters to rest evenly on a fringed runner. Tam, back behind the desk, smoothed her hair, a tangled nest of copper springs in varying lengths and sizes. She barely had eyebrows or lashes. Being free of cosmetics didn't help, but her general features were pleasant, almost child-like, including some freckling on the bridge of her nose. She offered to put his coat on a coatrack wrapped in silver garland, "if you're too warm. It seems like I'm always hot."

That was his stiff substitute for what he really wanted to say, and that was let's get this show on the road.

The snow clung to the cuff of his trousers and bled into his socks. He stomped to clear the slush puddling around his shoes. This startled the cat, who threw itself against the sides of the carrier.

She came around, buttoning her smock. "Let's give Otis a minute." She playfully inserted one finger between the latticework ventilation.

"You draw the short straw to be working Christmas Eve?"

"I volunteered. This is, after all, a night of animals witnessing a miracle."

"Awfully large facility to be staffed by a little gal like you."

"There's usually more of us. It's unusual circumstances."

"That, and Christmas," she reminded him.

He sniffed again. "I smell something burning."

Tam's left shoulder hitched to indicate the back of the clinic. "Empty coffee pot on a warmer."

Upon his next sniff, she offered tissue from a box with "Allergies?"

He dabbed his nostrils. "Possibly. Domesticated animals in general were never my forte."

This was proven by the way he fumbled with the carrier. She brushed his hands aside with "I'll do that" and disengaged a front pin lock that worked like a deadbolt.

Otis lowered his head in caution yet stepped immediately out onto the tile to investigate his environs.

A perfunctory expression of sorrow he awaited didn't come.

Instead, she passed her palm down the length of the cat's body and estimated Otis at 10 or 11, "not yet a senior citizen but his kitten days are well behind him. Listen to that motor start up!" she noted of the cat's loud purr. She upended Otis to glance at his rear. "Neutered. Housecat only, I assume." She gently pressed his groin and abdomen, then his throat for swelling or reaction. "So what's the problem with Otis?"

Lie Number 3. Animals up to twenty pounds were permitted if accompanied by a security deposit.

Steady. The word was bound to instigate confrontation.