Out of Nowhere (MM)

Seth tries to do his job the best he can. Yes, he’s the head of the company; yes, his meetings include playing poker; and yes, it works out fine. This time is no different, even though the news is more worrying than usual. But he’s going to take it one step at the time and be just fine. It’s more of the same in the end -- talk to these people, arrange that meeting, and don’t panic anybody. The stakes are higher, but it’s nothing he hasn’t done before. And he gets to spend time at the fire station with Connor. Seth should be good.

And there’s nothing out of the ordinary on Connor’s end. It’s a normal day, spent doing normal things, with the normal people. He happens to love his life and, though some things could be better, they could also be way worse. Connor is satisfied, and nothing is going to change that.

Everything is going according to plan. There’s no reason to believe that anything has to change. Right? 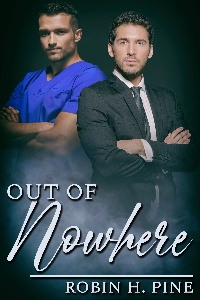 Out of Nowhere (MM)

Seth’s phone chimes with the list and he gets to ordering the food. As he understood it from the Fire Department’s PR, it’s better that the taxpayers don’t see take out arriving at the station. It blows Seth’s mind, but it’s more convenient to pick it up and go there. He has no idea if that’s a rule that every station follows, he doesn’t think it is, but it’s easier to not argue.

“Show him in, Brian,” Seth says as he finishes up the list.

Just as Seth adds the last side dish, parsley salad, Brian pushes the door open and John comes in. Seth glances at him. They aren’t that different, but the differences stand out starkly. Athletic build, green eyes like Seth, but where his are darker, John’s are light as fresh grass. Add red hair where Seth’s is dark brown, a dash of freckles, and John is drop-dead gorgeous where Seth is just handsome.

“Just a second,” Seth says and waits for John’s nod before checking out the food.

Seth knows that his looks are valuable. He has depended on them many times, more than he’d like to admit. However, when they pass into strikingly beautiful, like John’s or any of the others Seth called today, they bring trouble and little else.

And Seth’s done. The site loads a page with the approximate time and he smiles at John. “Sorry about that. How are you?”

“Great,” John says and smiles with dimples. “How about you? How’s Connor?”

“About to be fed,” Seth says and looks at his screen. “In ... one hour and forty-six minutes.”

John’s dimples deepen and Seth realizes that John only asked about Connor so Seth wouldn’t be inappropriate. Seth is a little annoyed. Not only does John think too highly of himself, but he also thinks that Seth is in love with Connor.

Okay. So this may be true, but John should know it’s not in his best interests to bring that up. Also, Seth has proven himself many times over.

But the subject of today’s meeting tells Seth that John is right to be careful. People are going out of their way to get information on him, more than usual, so Seth supposes he understands. That doesn’t necessarily make it better, but it’s an explanation.

“There has been an increase in the number of hackers you have,” Seth starts directly with the problem. Both of them are busy men. “Nobody got through and it doesn’t look like they will any time soon but it’s something you should know.”

With a stiff smile, John asks, “Should I be worried?”

Seth hesitates and says, “I think it’s too early to tell. Just listen to our rules to avoid getting followed and be careful. Don’t panic, but don’t ignore the warning either.”

“Yeah.” John nods, but his smile becomes a touch more forced. “Any other suggestions?”

“Um ...” Seth looks in askance at John, knowing there’s something he’s not getting and John doesn’t seem to want to share. “No. Ask Lisa. From Security. Maybe Simon, in IT. They should know better than me.”

John blinks. Seth blinks back. The awkwardness of this moment can’t be overstated.

“Send her in,” Seth says and swallows his sigh of relief.