Clarice Nash has made the purchase of her dreams, buying Riverview, a sprawling 19th-Century plantation house on the outskirts of Savannah that she has admired since childhood. But when her restoration starts on a bedroom mysteriously locked for decades, the hauntings also begin -- the hauntings of two lost souls reliving through eternity one night of unbridled passion.

At first unnerved by the ghostly lovemaking, then growing obsessed as the weeks progress and the visions gain clarity, especially when no one else can bear witness to the nightly proceedings, Clarice locates a descendant of the original owners, determined to solve the mystery and free her home of the lust-filled phantoms.

But when she meets Derek Ballantine, great-great-grandson and spitting image of the handsome Esau Lamont Ballantine, the virile male spirit consuming her every waking thought, she’s haunted by desires within herself, cravings she believes only Derek can now fulfill ... 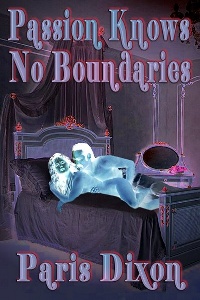 “There, there!” cried Clarice, glancing at her wristwatch for clarification -- 1:37 A.M. precisely. “Can you hear it? It’s starting. Right on time. And you thought I was crazy, huh?”

“Ah ... hear what?” asked Tangie, standing directly behind her outside the closed bedroom.

From the other side of the mahogany door issued the male spirit’s familiar, husky, lust-filled chuckle; the female spirit giggled in answering delight.

Clarice spun around to face her friends. The three sets of eyes staring at her in query whisked away her smile of triumph. She looked from one frown to the next. “Quit kidding, Tange. How can you not hear that? Tell her, Leslie.”

Leslie blushed and glanced at Monica.

Shivers horripilated the skin along Clarice’s arms. For the first time, she felt sheer terror -- not at the ghostly presence within the bedroom, but at the notion that perhaps she had indeed gone insane. “Okay, come on, you guys. Quit clowning around. Monica ... Mon, please tell them -- tell me, for pity’s sake -- you hear that.” She cocked a thumb toward the door, even as another wave of masculine laughter rumbled with what sounded like enough force to wake the dead.

Monica’s face deflated, her once-hopeful expression vanishing. “Clarice ... I don’t know what you want me to say.”

With a surge of crazed fury, Clarice flung open the door and immediately felt the customary chill air. She flicked on the newly installed electric light and dragged Monica into the room by her sleeve.

There, beside the bed, stood the slightly transparent male figure, stripping out of his phantom jacket and looking as devilishly handsome as ever. His long fingers frantically worked the buttons of his waistcoat, while beneath his bushy mustache, his tongue swept his full lips.

On the mattress lay the female spirit. Although still too misty and wavery for Clarice to clearly view, the woman spread her legs to her ghostly lover.

“I am thirsty with desire for you, my sweet,” he said, his voice booming. “Where shall I commence quenching my thirst?”

The female spread her legs even farther apart and began stroking herself. Clarice felt her own clit start to tingle, as if also being teased by fingers. “I want your tongue right here. Right now! Taste me, my love, drink from me ... drink from me ...”

Clarice found herself mouthing the words to this salacious performance, the lines having been long-embedded in her brain. Knowing exactly what would happen next, she focused all of her attention on the male and watched as he practically tore off his shirt, revealing the sinewy, lean torso Clarice had come to sinfully admire. The hair covering his firm pectorals and muscle-ridged abdomen looked as crisp and as inviting as ever. Her fingers itched to fondle him, while her mouth hungered to suckle each of his large, hardening nipples.

Clarice blinked when Monica’s voice cut into her thoughts. She whipped around to face her friends. “Now do you believe me?”

Again, frowns met her gaze. One by one, the girls stepped into the chamber, each wrapping their arms around themselves and visibly shivering. But they inspected the room from wall to wall, obviously seeing none of what had so totally enthralled Clarice night after night.

Clarice stepped toward the bed, pointing with a shaky finger. “Watch, damn it, watch!”

“Watch what?” asked Tangie. “Come on, Clarice, give it up. Even the worst prankster knows when to surrender ...”