Bound by misery. Marked by sin. Set free by death.

Barely into their teens, without homes, they dwell in neon shadows, the violent eddies of urban America. They trade their innocence for money, abuse their hopes, and then a monster comes ...

A monster without fangs or claws, but more deadly. Because of them, he has lost everything: his wife, his family. And he vows to clean the streets of Chicago ... for good.

One of the street kids and a man of the cloth form a desperate pact. Together, they will find the madman whose basement has become a chamber of horrors ... 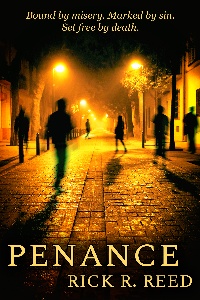 Jimmy Fels occupied his street corner. At thirteen, he already knew the poses. There was a casual defiance in the way he leaned against the storefront doorway, pelvis thrust out just enough to attract the interest of the cars cruising by more slowly than the others. He wore a faded jean jacket, Metallica T-shirt, pegged jeans, and Reebok Pumps. His ripped T-shirt deliberately exposed a nipple and a flash of smooth white stomach. The top of the T-shirt was cut away to reveal a gold rope chain, glinting in the glow of the streetlight above him.

Green eyes, wizened beyond their years, stared out of a pale face. He brought a cigarette to his full lips, lips almost too feminine and full for a boy, too ripe for anything clean. His hair, freshly washed, was still damp, looking darker than blond.

He tried not to appear too interested in the cars passing by, some slowing down to take a look at him. He knew it was bad to look too hungry. Make them think you’re doing them a favor ... always keep the upper hand. Street knowledge passed on. Remember Gacy. Remember Larry Eyler and what he did to Danny Bridges, the boy who ended up chopped into pieces and thrown into a Dumpster. Get it over with as quickly as possible and keep moving. But he looked anyway, his eyes moving slowly, catching glances out of the corners, and saw the shadows of men leaning forward, their faces ghostly through car windows.