For Virgil West, seventeen, student and outcast, phasing out of this existence and into another is something he’s neither prepared for nor is it something he wants. An object of derision at his school, he finds himself a target due to his phase-outs.

Once he leaves this Earth and lands on a world that he calls Earth Two, he encounters other people who have gone through the same ordeal. The one thing that they have in common is that they all went through the same phase-out period of time and that they were no one special.

Virgil meets Jiao-jie, a Chinese girl his age. In turn, they meet some older people who have come from all walks of life. Together, they forge a new society and try to learn more about the world they’re on.

Life continues, but when an old enemy returns, Virgil finds out that their new Earth may not be big enough for them. The battle between good and evil, as well as survival, begins again. However, this time, only one side can win. 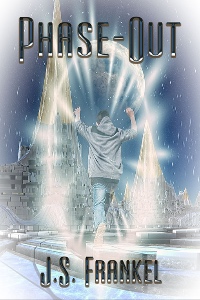 Patty Miller tapped me on the shoulder right in the middle of American History class. Two o’clock on a Thursday afternoon, early March, and life in Tacoma was its usual ordinary self…sort of. “You’re fading away.”

Strike the ordinary bit. Her voice came out all whispery, something awed and shocked at the same time. Our teacher had instructed us to study—that is, quietly, no talking, texting, or message passing—and so we’d followed his edict. I glanced around. A few students were sleeping.

My reply, maybe a little too loud, woke everyone up, and they turned their heads in my direction. I couldn’t believe it. If Patty had said, “You’re flying low and losing altitude,” or, “You got a booger hanging from your nose,” then I might have believed her, but this?

Then the hysterics started. The teacher yelled, “Virgil West, what kind of prank are you trying to pull?”

Initially, it had been a nose hair shy of weird, but after the teacher bellowed her question, everything went downhill. I figured Patty was making a joke, but she didn’t have a flaky rep and wasn’t into drugs. She happened to be an honest person. Truth was truth.

After class, I wandered around in the hallway, and a few students came over to stare at the supposedly disappearing kid. It bugged me. “What are you staring at?”

They got surprised looks on their faces. “Uh, nothing, man. We’re just waiting around for something to happen.”

Go and wait somewhere else. I’ve got a life.

Sheesh, American History had only been over for a couple of minutes, but word traveled fast. In Geography, while I was taking my seat and feeling incredibly out of place, someone asked, “Not gone yet?”

A few of the other kids laughed, and then the teacher called for order. No, not gone yet…and did they know what they were talking about?

Larry Merton cornered me after the bell rang, signaling the end of the day. A walking monolith at six-one and two hundred pounds of weight-trained muscle, he was the school’s star football player and chief asshat.

Today, he was more of the latter than the former, and he decided to emphasize his Alpha Maleness by hip-checking me into my locker. My shoulder banged hard against the metal, and I winced.

“What do you want, Laurence?”

He just had to make a strange day worse. Maybe he got off on it. A few other students stopped to watch the fun and laugh.

Larry shrugged and gave me a mean smile. “Nothing, Virgil, I’m just foolin’ around.”

He walked away, smiling. After pushing my way through the crowd, I went home rubbing my sore shoulder. What a jerk. He’d been making my life miserable since elementary school. Why some people had to be morons twenty-four-seven was beyond me.

Along the way, I looked up at the sky. Tacoma—that is Tacoma, Washington, and not Georgia—always had cool weather in the early springtime, and the crispness of the air made me feel a bit better. This being my second-to-last year at Pierce High, I wanted to, no, had to get decent grades, as doing so-so in math and science wouldn’t cut it.

A few of the other kids rode by on bicycles. One of them was Patty. She stopped to stare at me, and my only thought was that my fly was open. Then she got her bike going again and rode like hell out of sight.

My mother, a short, round, stressed-out sort in her mid-forties, met me at the door of my house. Since my father died a year back—he got hit by a drunk driver—she’d been working part-time as a store clerk and dealing with his loss.

Dealing with loss—a person had to get used to it. In my case, I used to enjoy playing catch with my father and talking to him about life.

Now that he wasn’t around anymore, I dealt with it by studying, keeping to myself, and trying to be supportive of my mother.

“I got a call from your history teacher, Virgil,” she began, a quizzical look on her face. “Is everything okay?”

Why shouldn’t things be okay? Got yelled at by my teacher, hip-checked by the local goon, so what else was new? “Everything’s fine, Mom. I have to study.”

Up in my room, door shut, I tried to zone out the earlier happenings of the day. Eventually, I found a rhythm with my studies and kept at it until my mother called me down for dinner.

The next day at school, everyone gave way as they saw me approach. I heard a few mutters of the disappearing student come my way. I ignored them. After all, they’d been ignoring me for the past few years. I belonged to a group called the Invisibles.

That was a rare breed of student. They were neither popular nor unpopular. No one ever spoke to them. No one knew why. It was what it was. The other kids had labeled me as an Invisible at an early age, and it seemed sort of futile to fight against it.

Today promised to be no different. I went to my locker, pulled out my books, and sure enough, Larry waited there with a grin on his stupid face. “You gonna do something if I hit you?”

Direct and right to the point. Nice way to start off a morning. Turning around slowly, I sized up my chances against him, which were nil. Comparing his stats to my five-ten and one-seventy, I didn’t stand a chance. Still, for some reason, I decided not to back down and got in his face. “Is there a problem…Laurence?”