Fran returns to the rez, fleeing the abuse which terminated her modeling career. A life filled with too many wrenching losses has left her afraid to love.

Ben, burned by a woman who demanded more than he could give, is determined to find success with his small airline, not become another Indian drunkard or failure. He hasn’t got time for love.

Fran trusts Ben with her safety, even her spiritual healing, but not her heart. Ben finds Fran an irresistible puzzle. Can he solve it while he keeps his emotions untouched? 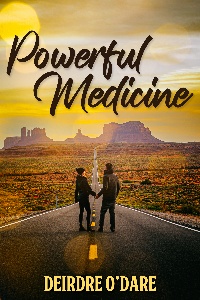 She inserted her key in the rented van's ignition only to sit there, debating with herself. Do I or don't I? And if I don't, what do I do instead?

From her vantage point, Fran could see several blocks straight down the street. A garish sign came alight as she watched, at the nearer end of the second block.

How could they call a bar The Kiva? In the ancient lore of her ancestors, a kiva was a temple, a church, a town meeting hall and more, a place of sacred power. How could anyone here be so tastelessly insensitive?

Mulling this issue, she idly watched a red and white truck pull up and park three lengths ahead of her. When two men got out, their vast differences caught her attention. The driver was Cody Jonas, while the second man looked shorter and heavier. He wore a shirt in colors even louder than Cody's, a shirt so new it still had wrinkles from its packaging folds. With that shirt, he sported stiff new jeans, flame-red cowboy boots, and a big white western hat.

The attire might not be familiar, but the walk was. She'd often seen that swagger, the flaunted arrogance. It could be no one if it wasn't Sal Gambruzzi. Nobody else had quite the same exaggerated parody of cocky coolness he affected. Without further conscious effort, she made her decision.

Though the map in the phone book wasn't the greatest, she had studied it intently. She'd already looked up Ben Yazzie's address, too. Starting the SUV, she drove off, following the directions she'd memorized. They led her right to 3252 Mariposa Way. The small tan-stuccoed and flat-roofed house faced east. Two juniper trees grew in the front yard, and a blue and white pickup sat in the carport. Unless Ben had another car, he was home.

Fran parked behind the pickup, climbed down, and walked a few steps along a curved sidewalk. With a hand that wouldn't stay quite steady, she rang the doorbell. When the chime sounded faintly from within, she held her breath.

For a long moment, she didn't hear anything else. Finally, the sharp rap of footsteps approached the door and it jerked open in front of her. Ben stood just inside, dressed in jeans and boots, a denim shirt hanging open to reveal a wedge of bronze, muscled chest.

Fran's gaze slid reluctantly up to his face. He scowled, his eyes hard and his mouth drawn into a taut, thin line. Whoops, had she arrived at an awkward time?

"Yes?" His gruff tone added to that impression.

"Fran? I didn't recognize you at first. That's some get-up. Something wrong?" His expression softened slightly as he recognized her.

Her nerves were too taut to allow her to appreciate the humor, although she knew she looked peculiar. "Can -- uh -- may I come in?" As much as she hated to intrude, she had to find shelter. Maybe within a set of walls, the chill expectancy shivering along her spine would ease. Although she kept trying to tell herself Sal would have no way of tracing her here, she couldn't convince her fearful heart.

Ben nodded as he stepped back. "Sure. Come on in. I called the Lake View while ago. When they told me you'd checked out, I didn't know what to think. What's going on?"

Fran eased past him and walked to the nearest seat, a simple sofa upholstered in textured beige. Because her legs felt as if they would not support her another moment, she didn't wait for an invitation to sit. Sinking onto the sofa, she took a deep breath and let it out slowly.

"I guess I've got to tell you. It's not just me now, not just my trouble. Sal Gambruzzi is here! I saw him with Cody Jonas, not ten minutes ago, walking into a bar down on Canyon Boulevard, the one called The Kiva."

Ben made a face as if he'd tasted something nasty. "I know the one. But who in hell is Sal Gambruzzi?"