Price of a Tattooed Soul (MF)

Lydia Nicholls lives an ordinary life. She works, she has the occasional date, she struggles with her weight. Only one thing sets her life apart from others -- the anonymous music boxes she receives every year on her birthday.

When she turns thirty, everything changes. This box comes with a name. As soon as Lydia utters it out aloud, she disappears from her ordinary, LA life and wakes up in the care of the man responsible for the annual gifts. The only catch is ... she’s in Montana. In 1894. With a man who has magic at his fingertips.

It takes little time for her to grow comfortable with her temporary host, but in spite of his gentle nature, Del Wessner is a man with a past he’s determined to shield Lydia from. Together, they’ll weather mysterious attacks on his home, not-so-mysterious attacks on his Kootenai friends, and the fact that in less than a month, Lydia will return to Los Angeles and her own time. Alone. 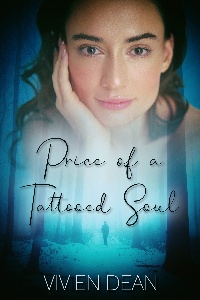 Price of a Tattooed Soul (MF)

Lydia didn’t know. The last thing she remembered was reading aloud the verse that had come with her music boxes. There had been thunder and lightning and the earthquake, and then ...

She blanked on what came next.

There was no then. Then she was here. Wherever here was.

Falling against the snow, Lydia groaned as something sharp stuck into her side. Her fingers scrabbled through the snow and hit frozen earth before curling around a broken twig. She plucked it free from where it jabbed through her thin shirt. When it took all her strength to toss it aside, the first itch of fear began to crawl over her skin. Whatever had happened to her had left her weak as a newborn kitten, stranded in the middle of nowhere, with only the clothes on her back. It had to be up north somewhere if there was snow. Was it still California? Rolling onto her back, she lifted her lashes to stare up at the trees again, trying to recall every biology lesson she might have had. There weren’t many, and they had been over half her life ago. Her concerted efforts fell far short of anything resembling success.

Could be California. Could be Canada. To a city girl like Lydia, a tree was a tree.

Letting her eyes drift shut again, she took a few minutes to inhale deeply, concentrating on trying to clear her head. The memories were there. It was only a matter of remembering. Focusing. Replaying through the past ...

She stopped in mid-thought. She had no idea how much time had elapsed. How long could she have been unconscious? It was dusk, so only a few hours at most, but then how did she get so far up north? Could she have been out of it for over a day? Her blood chilled even further at the thought of losing so much time.

But she was alive. That was a good thing. And outside of being debilitated, she didn’t think she was hurt. Cold, yes, but nothing was in pain. A shiver undulated through her body. Okay, she was very cold.

A shadow fell across her face, momentarily darkening the flames that danced through her closed eyelids. It took most of her remaining strength, but Lydia opened her eyes again, curious about what had caused the shift in light. Her pulse jumped when she saw the man standing between her and the fire.

He was dressed in baggy trousers and thick boots caked with mud and dirty snow, with a white shirt barely visible beneath his bulky brown coat. The clothes looked sturdy, like something a mountain man would wear, but they hid anything specific about his body shape. She couldn’t even tell how tall he was. Her best guess would hazard him around five-seven or eight, though Lydia was all too aware her angle on the ground skewed her perspective. In spite of the chill, his head and hands were bare. His brown hair fell nearly to his shoulders in a shaggy cut that said nobody had put scissors to it in quite some time, and his hands were strong and broad where they hung at his sides.

His face banished all those incongruous details.

Eyes currently regarding her with such awe and disbelief that she had to stifle the urge to look behind her for the true object of his attention.

“You’re here,” he murmured. His breath took form in cloudy wisps before his face. “You came.”