Simone, a female-identifying android, is part of a scientific team sent ahead of the first colony to return to Earth, which is finally habitable again after centuries of radiation recovery. She mostly finds her human crewmates irritating, and the most irritating by far is Dr. Lucy Zhong, who slowly becomes Simone's best friend, more important to her than anyone else has ever been.

When Lucy is fatally injured, she kisses Simone during her last moments of consciousness. Only then does Simone realize they may be more than friends. To save Lucy, Simone places her in the last functioning cryo-pod, even though this means sacrificing another crewmember. Simone's programming should not permit that kind of choice, but if this is a malfunction, Simone doesn't care as long as it saves Lucy.

When the colony ship arrives, Lucy is revived, and discovers it’s her turn to play rescuer, as Simone has been slated for deactivation. Does the android's "malfunction" mean she returns Lucy's feelings? If Lucy can't save her beloved Simone, she'll never find out. 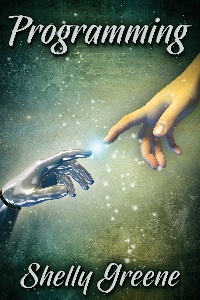 Assessor: Simon, doesn't your programming make it impossible for you to harm human beings?

ER1-K894: I am, for instance, permitted to take measures for my own defense, within strict guidelines.

Assessor: And was it self-defense that led you to rip Oliver Cooney out of his cryo-pod and leave him to die on the floor of a storage container, Simon?

ER1-K894: No, sir. I am also permitted -- compelled, even -- to protect the humans in my charge. There are subroutines designed for triage situations.

ER1-K894: Yes, sir. Dr. Cooney's injuries were severe. It was unlikely he would survive even with the best medical care. Dr. Zhong's chances were much higher, even with the sub-standard prep I was forced to provide. Do ...

Assessor: [Long pause.] No, I do not. The remaining records of the Curie's mission are fragmentary, but there are indications you did not get on well with Dr. Cooney. Whereas you seemed to develop a positive preference for Dr. Zhong's company.

Assessor: Supposedly. Yet you are not the first I have seen develop a preference, and you are clearly capable of that, considering the ... alterations you've made to your appearance.

ER1-K894: A feminine appearance does not interfere in the completion of my duties and therefore does not violate my programming.

Assessor: But suppose a preference did interfere in the completion of your duties. Are you certain you did not put Dr. Zhong in that cryo-pod because you liked her better than Dr. Cooney?

Assessor: If that be the case, then why did you wait until Dr. Zhong's condition was so advanced before putting her in the pod?

ER1-K894: [Long pause.] I had to wait until she was unconscious, sir, or she would have forbidden me to do it.

Assessor: So you did it knowing you should not?

ER1-K894: Because a particular human does not like something does not make it wrong, sir. Dr. Zhong is ... sentimental.

Assessor: But you are not.

Assessor: Then it would not bother you to know that Dr. Zhong's revival failed and she was declared dead at 0900 hours?

[ER1-K894's seat falls over behind him, and he exhibits signs of severe distress, including altered color and impaired balance, causing him to grip the edge of the table and damage it.]

Assessor: No. No, it's not true, Simon. You may take your seat. It's not true. I have no knowledge of Dr. Zhong's revival. As far as I'm aware, Dr. Zhong is fine.

ER1-K894: I believe your actions just now fall under the human definition of 'cruelty,' sir.

Assessor: Only if you actually care about Dr. Zhong's welfare, Simon.

ER1-K894: She is part of the Curie's crew, sir. Her welfare is my defining duty.

Assessor: She is no longer part of any ship's crew, actually. With the arrival of the Reclamation, the Curie's mission was concluded. Your internal manifest should reflect this. Does it?

Assessor: Simon, are you aware there are unauthorized anomalies in several sections of your code?

Assessor: And that these sections have been moved to permanent storage, rendering them undeletable without massive damage to your cerebral unit?

Assessor: 'Of course'? Do you mean to say you moved them there deliberately?

ER1-K894: To prevent any attempt to correct the anomalies.

Assessor: [Pause.] The name assigned to your model of android is Simon.

Assessor: You realize that leaves us with few options for how to deal with you.