Matthew and his friend Cory are thrilled to attend one of the most prestigious universities in the UK. On their pre-entry visit, they met Morgan Bentley and his stuck-up friends. Matthew takes an instant dislike to the arrogant, conceited, self-obsessed, beautiful, intelligent, and charismatic boy. Throughout the next year, Matthew harbours his dislike, never missing the opportunity to complain to his best friend, Cory, what a bastard Morgan is.

Then, an unexpected turn of events catapults Matthew, Morgan, and Cory into a nightmare, and all the things Cory had said about Matthew’s true feelings about Morgan come crashing down on his head, and he realises that what he thought was hatred and anger was, in fact, growing attraction and begrudging admiration. But when the deadly nature of the elusive Project X is revealed, it seems their budding romance is doomed before it begins, as one of them is unlikely to survive. 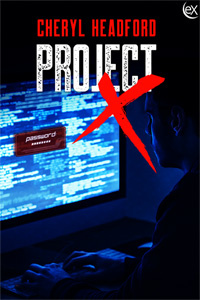 Morgan Bentley was a bastard. An utter, complete, Aone, cut-glass bastard. He was arrogant, selfish, cold, standoffish, cruel, and completely heartless. His history was peppered with broken hearts and broken people attesting to the fact. There was no doubt about it—he was a bastard.

Morgan didn’t have any friends. What he had was an entourage—people who cared less for the person he was than for the prestige his company brought. At the moment, he had a girlfriend, the undoubted Alpha Female of the university, a bitch called Charlotte Lethbridge, whose father owned half of Mayfair. The relationship wouldn’t last, though. They never did. And next week it could just as easily be a boyfriend.

No one ever said no to Morgan. No one outside his circle of friends ever said anything at all unless he invited them to, which he rarely ever did.

Cory often said Morgan was sad—he had to be. He had to be lonely and sad because he had no real friends, no lasting relationships, no one to share with. Not like us. Sometimes I had to stop myself laughing when he said that. Morgan Bentley sad? Not bloody likely. He had everything. I mean everything.

His father was a research chemist, heading a huge multinational corporation. They manufactured drugs and engaged in research projects, sometimes for the government. I think that’s why Cory was so fascinated with Morgan. He was getting a degree in biochemistry and wanted to be a researcher himself. Cory was awesome…but he had flaws, and his fascination with Morgan was one of them. Personally, I wouldn’t care if I never saw his smug face ever again. Hell, I’d have been so much happier if I hadn’t.

Because of his father’s job—he had to work long hours and take frequent business trips—Morgan was often home alone, and what a home it was. Fortunately, he lived quite close to the university—not that he would have stayed in the student accommodations, even if he’d lived a hundred miles away—in a house almost as big as the university itself. The estate comprised a good few acres of grounds, enclosed by a wall topped with electrified barbed wire. I’ve never been lucky enough to be invited inside. Hah!

I say it was fortunate he lived at home, because he rarely spent any time at the university when he wasn’t actually in class or working in the library, so I didn’t have to put up with him after hours, so to speak.

Unfortunately, Morgan was taking the same degree I was. He was even in my tutorial group. I hated him even more because he was brilliant in every way. He had a natural aptitude for the subject, speaking with passion about justice and honour, holding a debate with fluency, and having an uncanny memory for detail. In addition, when he wanted to, he could turn on the charm and had personality in bucketfuls. He outshone us all, although I was almost able to hold my own…sometimes.

It was truly unfair how Morgan had it all and didn’t seem to care about any of it. Did I mention he was gorgeous? Of course he was. How could he possibly not be? I swear the entourage would still have licked his arse if he was ugly, but perhaps we wouldn’t have had to put up with the adoring looks and mooning fans. I saw them everywhere. They would light up as soon as he came into the room. Their eyes would go round, and they would babble incoherently with soppy smiles on their faces. I hated them…and I hated him.

I was thinking all of that as I sat in a tutorial and listened to him talking about the assignment we’d been given. The topic was all about arguing a case involving easements and rights of way. My interest didn’t lie with property law, and although I’d researched and prepared, I hadn’t been able to drum up much passion about it. Morgan, however, did everything with passion—except live.

Morgan had this dark-and-dangerous image thing going on. He always dressed in black, wore silver jewellery, and sometimes black fingerless gloves. He painted his nails black, too, and of course, his hair was long and black with a blue streak. I don’t think he dyed it. Someone had once called him a Goth, but that was so the wrong word for him. There was no right word for him. He only wore designer…anything. He listened to classical music, and I’d heard, he played the piano like a pro. He drove an Audi convertible, or sometimes a monster silver bike. He defied description. He was unique.

That day, as usual, he was sitting in front of the window. I swear he did it for effect. The late autumn sun made his heavy hair shine with the sheen of silk. It was easy to get lost in the shine and the way the thick, vivid blue streak at the front stood out, jewel-bright in the sunshine.

Not that I cared. I barely noticed. I was too busy being infuriated by how effortlessly he tossed about arguments based on fine and obscure points of law. I’d never even heard of them, let alone considered them when preparing my arguments for today. How the hell was I supposed to counter that?

My mind worked furiously, casting about for a way I could get around the arguments he was raising. I barely understood what he was saying, although the lecturer clearly did and was, just as clearly, impressed. She was probably half in love with him, too. It was sickening the way everyone got sucked into the phenomenon that was Morgan Bentley.