Sequel to All the Right Strings

Car and Christine should be extremely happy living together as now they can take a much-needed vacation and enjoy the Caribbean sun.

But people want Chris to play a concert on St. Lucia, Walt Sheridan offers her a role in his next movie, and Chellen wants her to film another set of ads for their perfume company. And Car fears her arch-nemesis will steal another love from her.

Can Car find that romantic moment to propose? Or will all this prove too time-consuming? 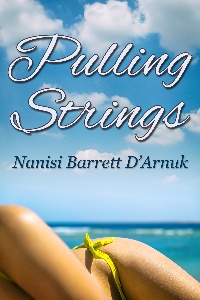 After we ate the wonderful meal, we returned to the sitting room for after-dinner drinks and to finally discuss Walt’s film.

“Have you read the script?” Walt asked Chris.

Walt looked Chris in the eye. “Here’s something else for you to consider. I’ve spoken to two actors who have said they’d love to do the film if you did. One will play your husband, the other your lover.”

We both looked up at him in surprise.

Jelly shifted his weight. “Ryan and Wilson.” He couldn't have smiled wider.

“With all that the media has been saying about you and Wilson that could be a big draw for the film.”

“You acted your ass off in those perfume ads,” Walt smiled at her. “I think you had the whole country wet or stiff.”

Everyone laughed as Chris turned red.

“I hate blushing,” she told him.

“Why are you blushing?” Tamra asked, “He’s merely stating the truth.”

Chris shook her head as I nodded.

“You’re taking a big chance,” Chris whispered as she looked into Jelly’s eyes, then back at Walt.

“You haven’t failed yet. I think you’d be perfect for it,” Walt said.

“So do I, Chris,” Jelly added. “There’s not another cello player who can do it.”

She shook her head. “I’m sure you could find someone.”

“And your name will draw audiences.”

She looked down at the drink she was holding, then she looked at me. “What do you think?”

“You know what I think,” I told her. “You can do anything you set your mind to. You just have to decide.”

“It all comes down to that, doesn’t it?” She took another deep breath and a gulp of her scotch.

“Am I going to have to kick you out again?” I had to laugh.

Chris looked up into questioning faces.

“When I couldn’t make up my mind about the tour, Car called me a failure and a coward. Then she told me to get out or she’d call the police.”

“After a while. It took time for me to realize it!” She smiled at me.

“Then, I guess it comes down to you, doesn’t it, Car?” Everyone looked at me.

“Oh, no! Not this time. She can do it if she thinks she can, if she wants to. I've told her I refuse to manipulate her again. It was too hard on me.”

“Was that last year when you came here alone?”

I nodded. “That was the loneliest eight months I ever spent.”

“Then, what do I have to do to convince you?” Walt asked Chris.

“Is it the money?” Jelly asked. “We can't give you what Scarlet and Angelina get, but it will be a substantial amount.”

“No, no,” she assured him. “I know I'm not in the ranks with those two, but I’m sure you’ll pay me what I’m worth. I had that audition with the Boston Symphony, though,” she explained. “I won’t hear from them until July or August.”

“I’m not sure we can wait that long, Chris.” Jelly frowned at her. “I’ve got other projects in line.”

“I know. Should I feel pressured?” Chris asked.

“Oh, no,” Jelly assured her. “You’re still the one who has to make the decision. Either you say you’ll do it or we’ll do something else.”

I reached for her hand and squeezed it.

“Do you really think I can do it?” she asked me again.

“You know the answer to that,”

She took a deep breath. “Can I have twenty-four hours to think about it?”

“Twenty-four is fine, but not twenty-five,” Walt chuckled at her, looking at his watch and shaking his finger.

“Have you talked to Tim about it?” Jelly asked. “He really should be at this meeting, but he’s not here this year.”

“Yes,” Chris answered. “I talked to him before we left and I let him read the script. He thinks it’s a good idea. There’s one other person I need to talk to.”