Richard Forrest is just going through the motions. Childhood baggage keeps him in line but away from some of the things he truly wants. His friendship with Adrian -- or Rain, as Richard calls him -- put him in constant conflict with the path in life he thought he should be on. After nearly two years of separation, Richard bumps into Rain, and their incidental meeting results in old emotions flaring to life for both of them despite everything in the way.

Rain’s free-spirited nature led him down a road of bad decisions that included drug use. This was ultimately the thing that separated the two of them in the past. Now a recovering addict, Rain is trying his best to put his life back together. When Richard finds out Rain is drug free, he welcomes him back into his life and embraces who he truly is in the process. Their friendship moves to romance until all too familiar behaviors start to resurface.

Can Richard and Rain work their way through this latest set of trials and tribulations? Will suspicion and fear tear apart what their love has stitched back together? 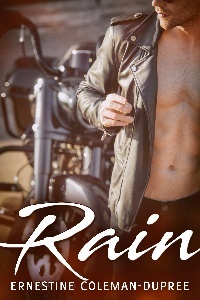 At that thought, old guilt for not pushing him harder toward help surfaced, but Richard squashed it down. It took a long time for him to get to the point where he quit feeling like it was his fault. When it came to getting help, Rain had to decide that for himself. He had to decide that he wanted help, and he had to be ready to receive that help.

“I suck at beating around the bush, so I’m just going to come out with my reason for tracking you down today.”

“Bluntness has always been one of my favorite Richie attributes. Lay it on me.”

Those violet eyes felt like they were boring into Richard’s soul. Swallowing hard, he had to look at a point over Rain’s shoulder to be able to continue talking.

“I know we haven’t seen each other in almost two years. I know you probably feel like you no longer know me, but I ...” Damn this was hard for Richard, but when hasn’t facing rejection sucked balls?

Swallowing his pride and his fear, he managed to spit it out.

“I ... I have more than enough space for the two of us, if you’re interested. My house is too big for one person anyway.”

Rain stood there staring at him so long, Richard’s nervousness tripled. He was sweating bullets by the time Rain looked away from him and down at one of his bags sitting on the floor.

“Why are you offering this to me?”

Richard hadn’t expected that question. A fact that left him floundering when it came to a response.

“I thought you could use the help.”

“I could, but pity isn’t what I want from you, Richie. So if that’s the only reason you are offering, I will have to say thank you, but no thanks.”

When he turned and started packing once more, Richard said, “How about the fact that something in me has died every day you’ve been gone from my life, and now that I’ve found you, I don’t want to let you disappear again.”

Boy, that took a lot of balls. In Richard’s mind, the past week alone would see him endure enough emotional letting to last him a lifetime. Make that two lifetimes. As it was, the suspense was killing him, so this life may well be cut short.

When Rain finally looked at Richard again, a smirk slid across his face.

“A simple I missed you would have sufficed, but I have to admit to liking the passion behind your version better.”

Richard could feel the heat flooding his face. He knew he was ten shades of red, but there wasn’t a damn thing he could do about it. Richard cleared his throat, took a deep breath, and tried to calm down, so his complexion could return to normal. It was a hard thing to do with Rain grinning at him like the Cheshire Cat.

“Relax, Richie, I’m just giving you a hard time for my own amusement.”

Not wanting the focus on his emotional outburst any longer, Richard said, “Well, what do you think?”

Dark brows furrowed together before Rain started packing again. Richard’s heart sank, and it was harder than he wanted to admit for him to stand there silently waiting for Rain to respond. Seconds tick by like hours. To Richard, it felt like he’d been standing there all day.

“It sounds great, Richie, but I don’t know if it’s a good idea.”

“What if that’s the problem?”