The twelve stories in this collection are queer twists on familiar fairy tales and folklore. From Snow White to Baba Yaga, a whole new world -- where stepmothers aren’t always evil and beasts aren't necessarily fearsome -- is waiting to be explored.

Will Sleeping Beauty wake up to who she really is and wants to be with? How will Wendy escape from the clutches of Hook and find Everland? What will the Huntsman do with Snow White, and how will kissing a frog change a princess’ life? 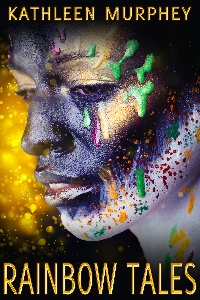 EXCERPT FROM "P Pan and Beyondland"

At school, the expectations were clear -- there were boys and girls but nothing in between. They acted their parts. Krystal was a girl, and Kyle was a boy. It was so confining. Girls were supposed to be feminine -- sugar and spice and everything nice -- affectionate, cheerful, compassionate, gentle, loyal, shy, soft-spoken, sympathetic, understanding, warm, tender, yielding. In contrast, boys were supposed to be masculine -- snips and snails and puppy dog tails -- aggressive, ambitious, analytical, assertive, competitive, dominant, independent, individualistic, self-reliant, self-sufficient, stoic. Krystal and Kyle were so much more when they could move in between -- when they could be both and more and anything in between. Wasn't that the point of being a full human being (being sympathetic and assertive, tender and self-reliant) -- and didn't that mean being a blend of masculine and feminine? All they knew is that they didn't fit in.

One night they threw open a bedroom window and cried to the stars the heartbreak they felt. To their surprise, in the middle of the night, a figure loomed above their bed.

"What do you want and who are you?" Krystal asked timidly.

"I am P Pan from Beyondland, but please call me P. With what you said to the stars, I think you might like to come to Beyondland."

Krystal and Kyle listened to the words and then looked at each other. They looked back at this P and decided that they couldn't tell what he/she/ze was -- ze was the better term they realized without being told. P was someone like they wanted to be, something in between or multiple instead of binary -- male/female. Ze was about fifteen maybe, with light stubble on zir face but eyeliner and lipstick, shoulder-length hair, the front pieces braided off to keep out of ze's face, tight-fitted clothes that only favored ze's ambiguous form.

"What are you?" Krystal and Kyle blurted out the same time.

"I am a human being," P answered, "the same as either of you; it's just that, in Beyondland, I can express any aspect of myself that I desire. That's why some choose to leave their homes and come and live with us."

"But are you a boy or a girl?" blurted out Kyle.

P cocked zir head, "I am neither or both. I am non-binary. In Beyondland, gender is a spectrum -- like a spectrum of colors from whites to yellows to greens to reds to blues and to blacks or like a big multifaceted rainbow. There isn't just white and black or male and female -- there is a whole range of ways to see one's self." P paused, studying them. "From the things you said, I thought you were looking for somewhere where being more than 'girl' or 'boy' was appealing, but perhaps I am mistaken."

Krystal had taken Kyle's hand under the sheets and squeezed it. "Yes, P, we are, but we didn't even know a place like Beyondland existed. All we know is how it is here," Krystal struggled to explain.

The children weren't sure what to do. They loved their parents, but they also knew they didn't belong. They played at being a boy and a girl, but the roles were wrong -- they weren't true to the core people Krystal and Kyle knew themselves to be. All these thoughts flitted over the children's faces.

P looked between them and smiled a sad smile, "It's a lot to take in and a lot to give up. You know how to reach me. Call me again if you're ready for Beyondland." With that, ze bowed and walked to the window -- which the children suddenly realized had been open the whole time.

"P!" shouted the children as they watched ze leap out the window. The children, in horror, leapt from their bed and ran to the window to find P floating just outside the window and chuckling with mirth.

"Didn't I tell you or didn't you guess? There's magic in Beyondland. How else could I hear you to answer your pleas? Good night, sweet children, and call if you need me." P then raised zir arms and flew away.