Scottsdale, Arizona, princess Randi O'Neal, depressed over her lackluster love life, is heading home from a shopping trip when a monster truck demolishes her little sports car. When she awakes, she's in a strange place, even hotter than familiar Arizona summers, where she meets an out-of-this-world sexy mentor. 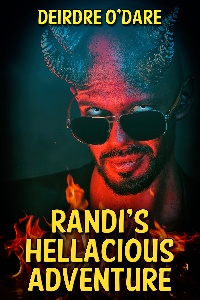 Where am I? Where’s my car and the city and everything?

All I can see are jumbles like some kind of ruins and a brassy, red-gray sky overhead.

I start to look around, but it’s hard to see very much. I can hear some music in the distance, like a bad garage band practicing. A few distant voices, mostly like people are yelling or screaming. This is so not familiar.

After I walk a ways, I see a crowd milling around and head toward them. The light is a little brighter here and they seem to be congregating along the edge of a huge fire. As if they need the heat -- it must be at least a hundred-fifteen degrees. Yes, I can see the band now. They’re all ragged and dirty looking. Their instruments look the worse for wear, too, as if they salvaged them from a really bad pawn shop. Still, the music isn’t too bad. Up close I can almost recognize the tune, something out of the nineties I’d say, though I can’t quite recall it.

A few people glance at me and then look away, not at all friendly. Well, poop on them too. Looking down at myself, I see my shorts are dirty and stained with oil or blood, something dark and sticky. One side is ripped almost up to the waist. My pullover top is not in great shape, and I only have one shoe.

Good grief, I’d never go anywhere looking like this. Where am I?

Finally someone approaches me. He’s tall, way taller than Matt who is six-two. Broader shouldered. Built, really built. He’s black. I mean not African American black, but ink-jet-ebony black, shiny, almost like iridescent. As he gets closer, I can see he’s totally nude, too. Oh, my God! He is huge, and I’d say he’s uncircumcised. I know I’m staring like a ninny, but I can’t help it. Finally I tear my eyes away from that and look up at his face. He’s the most beautiful thing I have ever seen, like a Grecian statue of black marble come to life.

“Hello, sweet thing. I can tell you’re new here. How about I show you around?”

His voice is like dark chocolate, deep and rich and smooth. I feel it all over. What does one say to a naked, huge, ebony-black man? I can’t even breathe, let alone talk! Do people really walk around here like he is, bare as they were born? Then I realize two other odd things about this man. First, it looks like he has hooves instead of feet, and second, he definitely has a tail! Otherwise he looks perfectly normal, well, as normal as a nearly seven foot, ink-black, beautiful, gorgeous, hunkalicious nude could look.

Finally I found my voice. It came out huskier and lower than I usually speak, but at least I could talk. “First, can you tell me where ‘here’ is?”

He smiled. His teeth were white and flashed in the flickering glow. “Why, you’re in Hades, darlin’. I have no idea how you came, but you obviously just arrived. As you can see, it isn’t nearly as bad as publicity makes it sound. Actually if you meet the right people, you can have a great time.”

“Of course you’re one of them?”

“Of course.” He offered me his arm. Since I was limping a bit with my missing shoe -- the ground was rough and really hot -- I took it and let him lead me away. His arm felt like low nap velvet over iron, a sleek covering over a hot and unyielding core. I wondered why my hand didn’t burn, lying on his skin as it did. I felt no pain -- tingles, but no real burn.

He led me around the band, past groups of people milling around, talking. It seemed like everyone talked, but nobody listened. Many of them wailed, cried, complained and cursed, while making rude gestures at everyone around them. I tried not to stare, but it was hard to ignore all the weird sights. A lot of people were nude, I realized, although many were clothed too. Some in filthy rags and others very nicely. I glanced up at my escort, trying not to flirt or play coy, although that wasn’t easy. I mean like he was so male and so big.

“What’s your name, dude? I mean, I don’t ordinarily go off with total strangers.”

He smiled, another one of those toothy smiles. I swear he had half again more teeth than normal. They were white and shiny, as gorgeous as the rest of him. “I’m called Azareal,” he replied.