Ward Gabriel was devastated when his husband died unexpectedly, leaving him to care for their young son. Ward didn’t expect to meet Paul, one of the teachers at his son’s school, and the feelings Paul stirred up.

Paul Kowalczyk wasn’t expecting the hot lawyer he met in passing would agree to go on a date. But he does, and as their relationship gets more serious, Paul gives Ward a dozen red roses, not realizing Ward’s husband used to give him roses every week.

When Ward’s son discovers the roses, should he tell his son he’s dating Paul, who isn’t out at school? Will Paul choose his feelings for Ward over his desire to remain closeted at work? 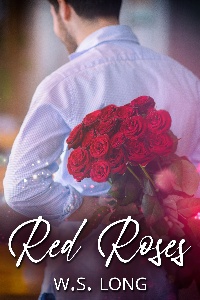 Around the corner a family of four headed down to Front Street. Paul guessed they were there to grab something to eat or to grab some sweets from the local bakery. Although Paul had taught at the local private school for several years, this small village of high-priced homes, manicured lawns, and large HOA fees still rubbed him the wrong way. His apartment home in Davenport was a few miles from the town, but it seemed like a world away from the perfect pre-approved Stepford-wive-ish homes in fixed color palettes. It was a planned, sanitized community Ward and his son called home.

Despite the humidity, Paul wore a hoodie and before he grabbed the red roses he bought, he slipped the hood over his head to conceal himself more, then he put the flowers in an empty box he had. It didn’t take him long to reach Ward’s house. He walked into the open garage, intentionally left open for him, and knocked at the door.

Ward opened the door, and pressed the button next to the doorframe to close the sliding garage door.

“Hey,” Ward said, smiling as he held the door open. He stood barefoot, wearing black gym shorts that stopped mid-thigh, and he wore a gray-colored tight T-shirt that showed of his trim and athletic chest.

Paul smiled in turn, and quickly stepped in, wasting no time in kissing Ward before he could even shut the door. When they finally broke away, Paul whispered. “You taste good.”

“Blackberry sangria. I just made some.”

“Are you trying to take advantage of me, Mr. Gabriel?”

Ward chuckled and his smile grew as Paul offered him red roses. “They’re lovely,” Ward smiled. “It’s been a long time since anyone bought me a dozen red roses.” Ward sniffed the bouquet.

“They pale next to you.”

Ward laughed. “That was the cheesiest line I’ve heard in a long time.”

“If cheesy gets a smile and laugh out of you, it was worth it.”

“Wow. Are you trying to seduce me, Mr. Kowalczyk?”

“Isn’t that why I’m here?” Paul chortled at Ward’s turn of phrase from the movie, “The Graduate.”

“Oh, I thought it was Siam Siam’s take-out?”

“You’re so funny,” Paul said, pulling Ward close to him, closing the distance, pressing his body and lips against Ward until Ward stopped to catch his breath.

“So am I,” Paul said with a sly smile, going in for another kiss.

“I meant for food.” Ward shook his head, while smiling, his hands on Paul’s chest.

“Oh,” Paul said, disappointed as Ward added some distance between them.

“Come on,” Ward walked to the dining room. The to-go containers were spread out with paper plates on one side and plastic ware. The only thing that wasn’t disposable was a glass carafe of dark colored sangria, and two wine glasses, one that was partially full.

They ate quietly at first without saying a word as they passed food between themselves before Paul broke the silence. “How long’s Benji gone?

“He’s at his grandparents until Sunday.”

“What do you think we drive up to beach this weekend?

“Want to stay over the weekend?”

Paul smirked. The thought of the two of them hunkered down together excited him. It would be the first in their five months of dating. “Oh, yeah! I want! But I didn’t bring any clothes. Although I could go back home and get some.”

“I don’t think you need clothes this weekend.”

“Oh, so it’s going to be that kinda weekend, huh?” Paul guffawed.

“If you want. No pressure. We can make it a quiet weekend,” Ward said. “Netflix and chill. I can bake lasagna. Order Uber Eats. You don’t have to do anything but just be with me.”

“And you’re okay with taking this ... this step?” Paul asked.

Ward glanced up from his food. His blue eyes were laser intense, then after a pause it softened to a warm smile. “Yeah. I want to.” Ward whispered. “And no one will know from school that you stayed this weekend.”