There is only one thing Charlie wants, and that is to spend the rest of his days with William by his side. But William is living in a nursing home, and Charlie is living ... somewhere. Ann says she will fix it; she’ll make sure they’ll get to live together again. Charlie hopes she will before William either escapes or figures out Charlie has left him in someone else’s care.

He promised William they’d stay together till death did them part, and he meant it, but what was he to do when he no longer could take care of William? 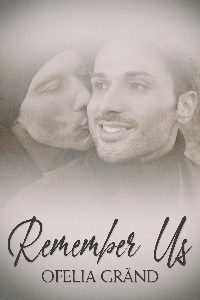 Desperately, I searched for something to say, something to make him forget about this place. My heart banged in my ears. I didn’t have the energy for any breakout attempts today. My body ached, and the weariness in my bones grew more insistent for each minute passing.

I honestly didn’t know how I’d find the energy to walk back to my flat. It wasn’t far, but I was finished. I’d had enough. Deep inside, my soul screamed at me; it said I couldn’t leave William, and I wouldn’t, but I’d had enough.

“No, I believe we come here for the apple pie.” It was Friday; there was a strong possibility there would be apple pie in the cafeteria. I watched William. His blue eyes too alert for his age—too alert for someone as confused as he was.

“Stop looking at me!”

It took me a second too long to look away.

“I said, stop looking at me! You think it’s all right for perverted old men to come here and ogle me?”

I sighed. The sting of the heron picking at my heart made me sink even lower. I shouldn’t have come, but there hadn’t been one day when I hadn’t. I couldn’t leave William here, but something was off with me today. If it all were to end now, I wouldn’t be sorry.

“You’re a handsome man.” I shrugged and hoped he’d drop the subject.

“I have a husband back home, and I do not intend to leave him. Ever.”

The words made me smile. I ignored the lump in my throat and tried to focus on the fact that he did love me. “He’s a lucky man.”

“He claims to be. Are you married?”

William’s lips thinned. “Then why are you here with me? You should be at home with him.”

William gasped. “He went on a trip without you? The bastard!”

I opened my mouth only to close it again. “He drops in now and then.”

I chuckled. “Somewhere down memory lane, I think.”

William reached out and squeezed my shoulder. “I’m sure he’ll be back soon, don’t worry about it.”

We sat in silence for a while. The morning show on the TV drew close to an end, and I started to long for a cup of coffee. I had no desire whatsoever to go to the cafeteria, though.

“Have you been married long?”

I glanced at William. He was watching me with a crease between his brows, clenching his jaws the way he did when he was thinking too hard.

He nodded, and the crease between his brows deepened. I held my breath, both fearing and hoping he would remember me.

“I’ve been married a long time, too ... I think.” He rubbed his forehead, looking lost.

“Yeah? He’s a lucky man.” I patted his hand. It wasn’t often he allowed touch, but I figured since he’d squeezed my shoulder, a pat on the hand should be okay. He grabbed my hand and intertwined our fingers. My joints protested, but I didn’t care.

“I miss him.” William blinked more rapidly. “I miss him every second of every day.”

I swallowed to prevent my throat from closing up and cursed the way my eyes started to burn. “And he misses you.”

He nodded. “I think he does.” With his free hand, he rubbed his chest. “It feels like he does. It feels as if I should be somewhere else.”

I didn’t say anything. What was there to say?

The silence grew. A soap opera started on the TV, and we sat there next to each other and held hands. Rain began to fall outside, drops fighting for room on the glass of the window.

“Do you want some coffee?” I was sure I could call on a nurse and have them bring us a cup. We never asked for it, but today I didn’t want to be around the others living here. All I wanted was to sit next to William, sip on a cup of coffee, and forget we weren’t at home.

He let go of my hand as if I’d burned him.