In this steampunk version of American history, slavery was abolished during the American Revolution and Native Americans live in harmony with immigrants of all races. Steam-powered carriages and trains make travel easier, and automaton robots do manual labor such as planting crops. The government uses a mixture of native ways and democracy, with both a chief and a governor ruling over the state of Delaware. Across the ocean in Great Britain, the people live in a near-dystopia, and tyranny and inequality still reign.

Amelia Corn is the daughter of the governor of Delaware, and her best friend Two-Spirit is son of the Lenape chief. When a delegate from Great Britain arrives and threatens war unless the U.S. agrees to serve Queen Victoria under colonial rule again, Amelia and Two-Spirit know they must make sure this never happens. Amelia enlists the aid of Nadine, a beautiful slave of the British delegate, who organizes a revolt while the citizens attack the British ships. Two-Spirit’s boyfriend, the warrior Strong Arrow, completes their team and helps take out any traitors or enemies who get in their way.

Amelia falls in love with Nadine, whose family is an ocean away; Nadine doesn’t know if she has room in her heart for romance. Two-Spirit becomes both shaman and warrior, which makes Strong Arrow insecure; he faces ridicule from his father because of who he loves. And the biggest threat of all is the might of the entire British Imperial Navy, rumored to be headed to Delaware to set up a stronghold for Queen Victoria to rule.

Can Amelia and her friends defeat their enemies or will they be torn apart, victims of a failed attempt at perfect freedom? 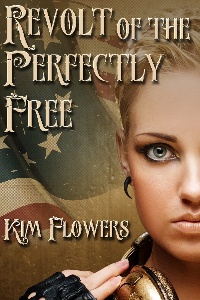 I turned to face her again. “You don’t know how unusual it is to hear words of kindness like this from one who I’m used to hearing only demands.”

Amelia’s eyes filled with tears. “What monsters upheld such an institution?”

“We’ve been told we’re not as smart as white people.”

“We’ve been told we’re cursed by God and this is what makes our skin darker.”

“I would curse that cruel God.”

“We get told it is the way of nature, for one race to serve another.”

“What a load of horse shit.”

“What if you were born in Britain and it was the only way you knew?”

Amelia gripped both my hands in hers. “But I wasn’t. Two-Spirit ... I mean, Spirit Warrior and I have been best friends for years. There are some people who think Lenape are inferior as well, and that those of European descent should take advantage of them and completely rule over this land. I have never felt this way. Most of the ones who believed those horrible things around here were slaughtered by our own hand yesterday. Please don’t worry that I might secretly hold prejudice or judgment against you. I only see a beautiful woman whom I would like to get to know better, whom I hope to spend time with as equals.”

I tried not to smile, but failed, lowering my eyes. “I am only just eighteen. I suppose that does make me a woman. You seem to have the perfect answer for everything. When we have time, I can tell you more. My family and I were cut off from our homeland in Africa, but we’ve tried to preserve our oral traditions.”

Amelia furrowed her brow. “Do you think you would prefer to go back to Nigeria?”

“We don’t know if any of our relatives are still there, or who they are. We came from an area ravaged by slave traders. I don’t think it would be desirable to go back. Which is why we decided to make our way here, where it seemed like people from all cultures were starting a new world.”

Amelia’s eyes brightened. “That’s the way I see it. Perhaps we could all take our traditions and beliefs and live in harmony ... a land of love and opportunity.”

The more I looked into her eyes, the more confident I felt. “I’d scarce been on this shore two hours when ... when both ideals were presented to me.”

Fire rushed through my bones as Amelia pulled me into her embrace. My heart melted like a burning candle when I realized she was still willing to go slow in physical shows of affection for my sake, and was happy to hug me without trying to do anything more.

I caressed her cheek with one hand and softly kissed her lips.

“Amelia ... ifunanya.” I pressed her close, not caring that there were people on the shores below, preparing for war.

“Kuwumaras,” she responded, nibbling my lip.

I giggled and then stopped in surprise. I hadn’t made such a sound since I was a small child. “Are either one of us going to tell the other what these words mean?”

Amelia smiled. “I was speaking Algonquin.”

“Why don’t we say what we meant together?”

With smiles and eyes bright and wide, we both said at the same time, “I love you.”