Romance on the Sea (MM)

Cruises are often taken for special occasions, and in this case, Lane and Roger are celebrating their divorce. Actually, they just didn't want to lose the deposit made in happier times. They agree not to get in each other's way if presented with any romantic or sexual opportunity.

Roger goes right out looking for sex, but Lane isn't in a rush. With the unasked for help of a loose cat and an overly-precocious young lad, Lane bumps into Steve. After a few shared meals, shore tours, and a life-threatening storm that leaves the ship stranded in darkness, bumping turns to humping, and their relationship grows.

Shipboard romances are iffy, though. Can theirs survive a pirate invasion, a disabled ship, and a slam-the-door argument? 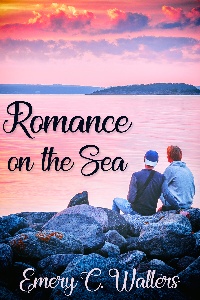 Romance on the Sea (MM)

"Back home, we prepared the whole school for a hurricane and it never showed up. I swear, the students were disappointed. It was such a letdown. We'd planned all these games and overnights for the ones who couldn't get home and poof, nothing. Life as normal."

"But this," I continued Steve's thought, "here we are, an unexpected surprise and a dead ship to go with it! Twice the fun."

"Pass me the champagne, will you? Say, where's Roger? Isn't he supposed to be in here not touching anything too?"

"Oh he's probably touching something all right; I just hope he doesn't get caught, let alone spread anything. What I'm wondering is where's my, I mean, the, cat? Last I saw she was on my bed with kittens."

"What? I saw her when I came over here, heading down the hallway, but no kittens anywhere. Did you dream it?"

"I may have dreamed pirates but I thought I was sober by the time I got back here and saw the kittens."

"Pirates? When was this?"

I told him about it, and his roommate's part in it.

Steve looked uncomfortable and poured me more booze. "Honey, I think you must have had too much to drink. She was in our cabin at that time and never left. She even told me she'd seen you in the bar, yes, but you were sound asleep, or passed out drunk as she so politely put it, the bitch! Weird. But you know what?" he gave me a very pleasant squeeze. "I think I love you anyway."

Oh gosh those eyes, and then those lips all frosted with champagne and the earth moved, or well, the ship did, but it wasn't just us. The whole ship started to tilt again. The waves rose up to our balcony, and water spilled through the railing and hit the door. The door broke, fell out of the frame, and the ocean rushed in. I wish these were all euphemisms for the great sex we had, but they weren't; they actually happened. I thought we were going to die, but then the ship righted itself and the water had me .I'd almost reached the door when Steve's arms grabbed me, and he kept me from going out with the water. All this came so soon after those words of love that I could barely encompass what was real and what was straight out of a romance book.

"Fuck," I burbled out, with a mouthful of sea water to go with it.

"Maybe later, honey, I think it's time to vacate the room and head either lower and inside, where it's stable, or up, and either way let's grab life jackets first."

We did. And then came a scratchy voice over the loudspeakers. "We have some power back and are going to turn into the storm. Things will be fine in just a few minutes. Stay where you are."

"Fuck you," said my hero as he grabbed the two life jackets out of my closet and put them on us.