Danny has decided it's time to make his life drama free, and he's going to start with his living arrangements. The strife caused by a previous roommate is not something he aims to repeat. His plans are neatly shattered, however, when the new roommate arrives.

Javier is exactly the kind of temptation Danny's hoping to avoid ... and with him comes a whole new set of problems that leave Danny helpless as to who he really wants. 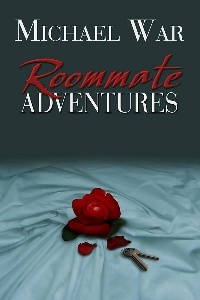 I knew words needed to come out of my mouth, but it wasn't happening. How could they, especially after the most beautiful man I've ever seen just walked in as my new roommate? I reached up to make sure that my mouth wasn't hanging open. I'm sure he got that type of response a lot, especially with that chiseled body, dark brown skin, and killer smile. It was as if he'd stepped out of some hunk-of-the-month calendar and into my living room.

"Danny, you gonna say hi, or do you plan on just standing there with your mouth wide open?" my other roommate Patrick joked. I liked Patrick. How could I not? He was a great guy: charming, smart, and hadn't hesitated about letting me move in even after finding out that I was gay. That is, until Patrick's best friend Brian came along. Although he never said it, I knew he was still a bit hurt that Brian and I had gotten so close. It had ruined my friendship with Patrick, especially since he thought I had been making the moves on Brian.

"I'm sorry, what did you say your name was again?" I asked.

"Yes, that's right. Are you by any chance Hispanic?" he asked intently.

"That I am," I responded with reserved enthusiasm. Back home, I was always accused of wanting to be white because I couldn't really speak Spanish. Although I could muster up enough to get by, I was far from fluent. Combined with an extremely light complexion, well, let's just say the word coco got thrown around a lot. It might not seem like much, but at the time it made me feel I was inferior to everyone around me. It didn't matter if I was the valedictorian or a pretty good drummer, as long as I didn't speak Spanish, people in my town thought less of me.

I'd never told anyone back home that I was gay. I didn't want to add any more ammunition to my tormentors' arsenal. This had led me to shun my heritage, but as I got older, I realized that perhaps I needed to make more of an effort to embrace it once again. Yet the sting of not feeling good enough still lingered from time to time.

"Do you speak Spanish?" Javi asked. He appeared genuinely interested in getting to know me. Inside, that made me melt. Outside, I remained cool as a cucumber -- or at least I tried to pretend I did.

"Un poco," I responded, hoping that would suffice. I really didn't want to get into it right now, especially since I wasn't sure if he would judge me about it as others had.

"Well, we will just have to fix that sometime, won't we?" he said, smiling. He extended his muscular arm and offered me his hand. I grabbed it and was taken aback by his grip, which was strong, yet somehow tender. We stood hand in hand, for a few seconds before Patrick finally whisked him away to their side of the apartment. But not before he gave me a fierce glare that I understood all too well: "don't turn this one gay."

I turned away, and not because I was ashamed. I was just tired of Patrick's accusations. First of all, I did not turn Brian gay. Brian is and will always be happily straight and loved the ladies. But to the confused eye, I guess it might seem like I did. Brian moved in a few months ago after his previous roommate got him evicted, and we realized that we had a lot of things in common. We began to hang out regularly; he even offered to take me out to gay clubs on the weekends so we could dance the night away. He loved techno music, and felt the clubs I went to had the best selection. We didn't dance together, but it was close enough.

We would also stay up and watch movies together in each other's rooms, sometimes falling asleep on in the process. We were never naked, but we were so comfortable together that we would normally strip down to our undies. I didn't really think much of it, because it had felt like the type of sleepovers I used to have before my childhood friends turned into my tormentors.

One night Patrick walked into Brian's room and found him spooning me after a long night of drinking and dancing. I honestly didn't know it was happening, and neither did Brian until Patrick started flipping out.

We tried to explain that it was nothing, but Patrick wouldn't hear it. Brian decided that the best thing to do was move out. Ever since then, Patrick had been very wary of bringing any of his friends over, at least as long as I was there. He'd tried to get me to move out on several occasions, but with the cheap rent and close proximity to my classes, I wasn't going anywhere. I also wasn't going to let anyone push me around. I had had enough of that in high school and was sick and tired of people thinking they could just walk all over me because I was gay. I wasn't a small guy, but being slightly effeminate made people believe that I would give in easily.