To tell the tale of human history, we must also relate the history of our enemy, the archfiend, that apex predator, the vampire known as Count Dracula!

For centuries now, the Society for Cutting Up Dracula has been the last bastion of hope against the king of vampires, observing his lives, his loves, standing guard against his devilish ambitions, protecting humanity from his ambitions. Yet as Dracula, cunning and manipulative, takes up a scheme to repay his debts to the family of a man now lost to him, will his gifts prove overpowering for those that have drawn his interest?

Discover now the secret origin of the Prince of Darkness, his passions and persuasions, and the truth about vampires; discover now a history of the world unseen played out through the ages ... discover the truth of the Society for Cutting Up Dracula! 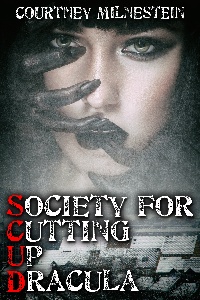 “Mrs Peabody is here to see you, sir,” the servant said, stepping back out of the way.

Awkwardly, she eased into the space he had vacated, finding herself in a warm room filled with sunlight and cheerfulness, a large, broad-shouldered man rising up from an armchair before the fireplace, his likeness identical to the old lord she had glimpsed in the painting on the wall.

As he rose, she noted the cat with the silver fur dislodged from his lap, looking balefully up at her with cruel little yellow eyes as if she was somehow responsible for its displacement.

“Please don’t mind my Carmilla,” said the Count, his voice rich and accented, his feet carrying him swiftly across the carpet to greet her. “She is a fickle thing, and she complains often at change.”

Luna hesitantly removed her gloves and brought her hand up to shake his in the way she imagined gentlemen did, and the Count bent low and kissed the back of her hand, looking up at her with a knowing smile.

“I am pleased to make the acquaintance of one who was dear to an old friend,” he purred softly, “especially one so beautiful.”

A warm blush filled Luna’s cheeks. Like the cat he had so effortlessly dislodged, there seemed something fickle, something capricious in the nature of Count Dracula, something that she supposed was common amongst foreigners with their strange manners and lack of indecision.

Not entirely unaware of her discomfort, the Count held her hand for a moment longer, his eyes fixed upon hers, and then withdrew, turning his attention to the servant waiting by the door.

Her arm dropped limply to her side, and she felt suddenly flushed and uncertain of her surroundings.

“Alfonse, if you could bring us in some tea?”

“Oh, and please take care to feed Zoltár. It would be well if he did not interrupt us with his mournful howls.”

The servant, Alfonse, bowed low once more, and Luna watched him for a moment as he retreated, closing the door behind him.

Dracula gestured to an armchair opposite the one from which he had risen, indicating that Luna take a seat opposite him. A thrill of nervousness ran through her.

“My hound is highly protective and somewhat jealous,” he explained. “I am afraid he does not take well to visitors, and thus must be kept from the company of strangers whilst I entertain.”

She nodded, gingerly taking her place upon the plush velvet upholstery and piled cushions of the armchair.

“I quite understand,” she lied, knowing nothing of dogs or their nature.

Between them, the silvery shape of the displaced cat looked glared at her, and then, lifting its head, strode away with apparent indifference, off to find some less crowded place to settle, she supposed.

“It appears none of your pets are quite fond of company, Count,” she said, offering a small laugh, hoping that he would find her joke pleasant.

“You must pay them no heed, Mrs Peabody, they are obviously no arbiters of great taste,” he replied.

“Please, call me Luna,” she murmured.

The Count inclined his head.

Across the room, in the bright sunlight that flooded through the open windows, the cat turned momentarily to look over at her again, the light casting a strange shadow on the carpet.

Luna fussed with her handbag in her lap, pretending not to notice the cat as it finally slunk away and out of sight.

She kept her eyes on the bag, not daring to look up, to meet his inquisitive gaze.

“Sir, you will forgive me for being so bold, but you mentioned in your letter that you knew my late husband.”

“Please, you need not address me with formalities,” Dracula responded quickly, “and it is true, I knew your husband well. Indeed, he was of great service to me in a time of need.”

She looked up, taking in the shape of him, the ruddiness of his cheeks, the curls of long hair, his neatly trimmed moustache. Yes, she thought, he did look exactly like the painting she had seen in the hallway, and had it not been for his entirely modern yet entirely unremarkable dress -- a crisp white shirt and black trousers and waistcoat, his tie similarly lacking in ostentation -- she might have considered the painting to have been an uncharacteristic portrait of the man in question.

Yet there was also something in his character, in his mannerisms that unnerved her, that put her on edge and made it difficult for to remain collected in his presence.

“J-Jean did not mention you, I’m afraid,” she stammered, aware of her impoliteness.

Still smiling, Dracula waved away any implied rudeness with a flick of the wrist.

“No doubt it was a trifling matter for him,” he said, and then his voice became almost wistful, “but, ah, for me, it was a much-cherished gesture indeed.”

Luna found herself suddenly possessed with a desperate desire to know just what this hidden history was, this strange story that she had not heard from her husband whilst he lived in which a man such as Count Dracula was so important a player.