Niccolo, a vampire-turned-private detective, is living peacefully in New York with his lover, Felix—until, on the eve of a certain holiday, a late-night visitor from his past comes calling… 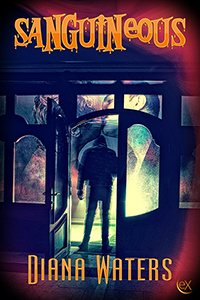 It was still several hours until dawn. Niccolo, who was by nature a nocturnal creature, found this both a relief and a hindrance.

He should have felt energized, but instead the night dragged at him, making his eyes itch and his stomach rumble. He longed for sleep, yet this would also mean another entire day before he would have the chance to eat, and he hated degrading Felix by asking for his assistance in the matter. Felix would certainly oblige Niccolo’s request, but he was also Niccolo’s friend and lover, not his personal blood bank. Besides, Felix was already exhausted from so many late nights—mostly spent keeping Niccolo company, since his line of work tended to get lonely even at the best of times, although Felix insisted he didn’t mind. He got more work done that way, he would argue, as though it was perfectly natural for him to be translating French at three in the morning, tapping away on his laptop until Niccolo was finally sleepy enough to call it a night.

No, best to wait another night before venturing out for sustenance. He had friends—well, acquaintances, rather—who would do him the courtesy, especially on Halloween. Some of them even took a peculiar pleasure in offering themselves up as a meal, which Niccolo supposed he could thank Hollywood for—that, and the internet. There weren’t nearly as many people, or cults, professing to be turned on by blood play twenty or even ten years ago, despite the fact that such things could hardly be hygienic. However, Niccolo had no interest in sleeping with any of them. Using such people, or anyone really, purely for practical reasons already made him feel disloyal enough, even if Felix was aware of it. But it couldn’t be helped. Food was food, no matter how unpalatable.

Niccolo heard a clattering from the small office kitchen in the next room, then the low sounds of drawers opening and closing and water boiling. He bent his head back over the desk and sighed. Being a private investigator was in many ways the perfect job, given his preferred hours, and it sounded interesting. Unlike black-and-white fifties films, however, there was a distinct lack of fur coats draped around the porcelain shoulders of femme fatales—just as well really, since Niccolo wouldn’t have known what to do with them—very few true mysteries, and far too many photos of cheating spouses. Tracking down the occasional lost and clearly over-pampered pet for clients who could afford such things was the best he could usually hope for in the way of moral satisfaction. Indeed, the closest Niccolo had come to his idealized inspiration was when he had purchased Venetian blinds for his office windows, and as Felix had pointed out, some things just looked tacky in color.

More to the point, the job gave Niccolo something ostensibly useful to do with his time, a decent excuse to the public for keeping such hours in the first place, and generally served as enough of a distraction at night to keep his mind from lingering where it shouldn’t. Sadly, this did not make the paperwork any less tedious. Sometimes he still caught himself tapping his foot, drumming his fingers, biting the inside of his cheek, clenching his pen uncomfortably tight no matter how hard he attempted to concentrate. Ah, well—self-control comes with practice. He would simply need to practice more.

Felix—God bless him—would be out with coffee in a moment, and the smell would do Niccolo good even if the taste did not. He assumed Felix did a fine job of brewing it, but Niccolo could have precious little in the way of real food or drink without nausea catching up with him later. He could eat almost anything if he had to, and caffeine even worked just like it used to in the good old days, but most food had the enormous disadvantage of tasting like a mouthful of ash. Regardless, it alone would not sustain him any more than Felix could live solely on his favorite cheesecake. The coffee smelled divine. It was a pity Niccolo’s nose still worked even when his taste buds had changed so drastically. As usual, he knew Felix would spoon in a generous amount of sugar into the coffee, which did seem to work at least a little to cut the aftertaste—

Niccolo froze. Just out of his line of sight, a shadow flickered past, too fast to quite catch. He turned the other way to face it, and it melted away as soon as he focused his gaze. He glared, in no mood for tricks. If this was one of his other other acquaintances, he had no patience for them tonight. Niccolo might not have been the only vampire in the city, but that was no excuse for people to invade his privacy, and he had a low tolerance for theatrics at the best of times—save at cheap Halloween parties and in awful movies starring actors with horrendous, so-called Transylvanian accents, never mind the fact that most vampires he knew had never stepped foot in the country.

“If you’re out for games, you can take them elsewhere. Not interested. So either reveal yourself or piss off.”

Silence greeted him. Nothing moved.

“I mean it,” he warned. “Don’t make me resort to dumb threats, or so help me, I’ll be tempted to actually carry them out.”

Still nothing. Niccolo waited for several long moments before letting out a breath. It was only his imagination that was playing tricks on him his hunger getting the better of him, or perhaps something entirely mundane—a stray moth fluttering by, tree branches casting shadows off the street lamps outside, a quick gust of wind blowing trash past the window. He was easily distracted too much.

Niccolo had turned back to his paperwork when the answer finally came, in a voice lazy and drawling.