Marvin (Marv) Frontier, eighteen, a housebound hemophiliac of the worst sort, lives a lonely existence in Tacoma, Washington. He spends his hours reading and computer surfing until one day when he is contacted by someone who calls herself Sara.

Sara assures Marv that she means him no harm, and then she reveals that she lives far away—over twenty-thousand miles away—straight up.

Sara is a satellite with a sentient computer program aboard, but she needs one more bit of code to complete her. That means Marv has to help her track down her creator, Leonard Tilderman, formerly a professor and then an employee at NASA. He’s gone off the grid and no one can find him.

As Marv searches and learns more about Sara, he also finds himself falling for her, which seems to be an impossible relationship. Oddly enough, Sara shows the same amount of interest in him, and their friendship ripens into love.

Eventually, Marv manages to get the missing bit of code from the professor, just before he’s killed in an accident. Marv inputs it, but NASA’s representative, Major Grayson, also has plans for Sara, and Marv finds himself on the run from the major.

Things come to a head when Sara holds the world hostage by controlling every satellite still functioning, including the secret orbital weapon’s platforms that NASA and the other countries possess.

Marv is eventually captured by Grayson and tortured, and his only hope is that Sara will be able to continue her journey, whether he lives or not. 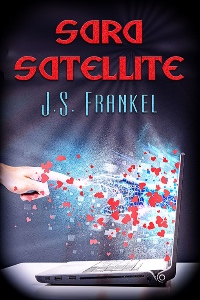 Being a hemophiliac meant one of two things—either live a life of eternal caution, or throw caution out the window and have fun with it all before everything ended. Those two choices ran through my mind while I looked out the window in my bedroom at the greenery of my backyard and wondered where my life was going.

Only two choices? At that moment in history, it seemed so. First option—be careful. I was what the experts called a severe hemophiliac B-type.

People like that, their blood didn’t clot the same as everyone else’s. They usually had chronic care treatment, called prophylaxis, which was a fancy name for getting plasma from the hospital. I was the lucky one here. I didn’t need a port, just an intravenous procedure.

Moreover, it was expensive, and while our insurance covered some of it, it still put a bite into my mother’s finances. My mother had a Fund-Me-Please account. Donations helped, but all the same, we weren’t rolling in the green. Long story short—I had to be careful.

As for option number two, that was for braver souls than me. Call it the curse of genetics. I’d read that hemophilia was caused by inbreeding. Maybe that happened in my family’s case. I didn’t know, and my mother didn’t know about it, either. All she knew was that I’d been diagnosed with my condition when I was around ten months old.

My mother had tried to cope. Lord knows she’d tried. At the very least, she’d stuck around. My father had decamped for parts unknown when he and my mother got the verdict about my physical state of affairs. Obviously, he couldn’t take the pressure. My mother had never bothered trying to find him. “Good riddance to stinky garbage.”

She’d said that to me once when I was around ten years old. She never mentioned my father after that.

While my condition wasn’t the worst around, I was right up there for severe cases. If my skin got broken, then it was RICE time—Rest, Ice, Compression, and Elevation. That helped.

But even though I was careful, I’d suffered through a couple of major bleed-outs, once in my throat and once inside my abdomen. They happened all of a sudden, hence their clever name, spontaneous bleeds. More fun—not—and hospitals sucked all the way.

Operations—I’d had them, mainly to stem the internal bleeding, so call me scarred up on my wrists, knees, stomach…pretty much everywhere.

I’d gone to school more bandaged up than an Egyptian mummy, along with elbow and knee guards just in case I tripped, or someone else tripped me just to see what would happen.

People thought that if I got a cut, it wouldn’t stop bleeding. Not true. Eventually, it did. While my blood clotted after a while, I had a bigger problem. If the blood entered my joints—knees, ankles, and elbows—that caused swelling and arthritis. Guess who had that?

Arthritis-like symptoms meant that my knees and elbows were always swollen. They hurt, too. Not that anyone cared. I usually wore a medical tag so that the paramedics and doctors would know what the problem was.

Oh, and I was AB-negative. That was the rarest blood type around. If the hospital didn’t have my type on hand, they’d use O-negative, the universal donor, but if they didn’t, then I was out of luck.

Fortunately, the hospitals and clinics were always well-stocked with blood, so if I needed a transfusion, I’d get it. Ironically, my condition gave me access to immediate medical treatment. The people complaining about waiting in line to see a doctor had nothing on me.

Upshot—I’d live, but I wouldn’t necessarily enjoy it, and I would have given that first-in-line status away to have been born normal. For me, life was like death, except it happened in slow motion. My life expectancy was about ten years less than the average person’s, assuming I didn’t have to have open-heart surgery or was in some kind of automobile accident…

Hastily, I pulled on my pants and a blue t-shirt. A glance at the full-length mirror in my room made me wonder why my mother had gotten a full-length mirror to begin with. It showed an eighteen-year-old guy with the physique of a twelve-year-old. My complexion was so pale people thought I was a real-life ghost—or mummy—or something. Not human.

For me, being human was what it was all about, and had someone given me the chance, I’d have settled for being normal and looking normal. Really.

Facially speaking, I was average at best, with plain ol’ vanilla nondescript features and a mop of dark hair that tended to frizz up after a shower.

My looks didn’t bother me. My body did, though. Just under five-ten and skinny-fat—my body had a thin veneer of fat and little muscle over a bony frame—I got upstaged by junior high students and often got mistaken for one. If they’d looked at my eyes, though, then invariably, they’d turn away, preferring to focus on something else.

Brown and deep-set, they held a smudge of black in them, the color of death. It meant my impending demise somewhere down the line. It meant being careful, staying indoors most of the time, not getting sunburned, and only working out with light weights—ten pounds was my max on everything. Oh, and I had to avoid physical contact, just to be on the safe side.

Reflections sucked. With a sense of resignation, I turned away from the mirror. Things wouldn’t change now. They never would.