Four months before her wedding, Yvette Thurman realizes this might be her last chance to have a sexual fling with a white man. But she never thought placing a personal ad would lead her to discover she was a lesbian.

Yvette’s small town life in eastern North Carolina never prepared her for the personal journey she undertakes as she struggles to find her heart’s path.

Through personal ads and late night visits to an adult bookstore, Yvette learns more about her own personal desires than she ever did when she was engaged to be married. If she embraces her true self, can she find acceptance and love from her family and friends? Or will she be forced to hide who she really is from those she cares about the most? 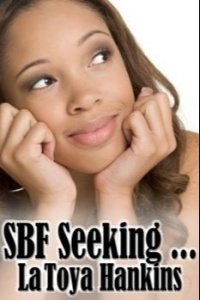 “So bottom line: you kissed her and now what?”

“That’s the thing. I want there to be a what. I liked her energy and even though she is the second lesbian I have been attracted to, I really think I have a chance to see what could happen with her.”

“I know I gave you the speech in the club about starting fresh, but I don’t want you to start down this path and halfway down you realize you’re not wearing the right shoes. If you plan to get to know this chick in order to ‘get to know’ this chick, then I want you to be sure. I don’t know her, but no one wants to be an experiment just ‘cause lesbian chic is everywhere you look.”

“Agreed. I have been thinking about this since last night, and you know I don’t make any moves until I have thought about all the angles. I guess I will know what to say the next time I talk to her. Speaking of which,” I said, looking at my watch to see its blue face read 7:45 P.M. “Jasmine should be getting home soon. She is taking some night classes at Central towards her MBA. I texted her and told her I wanted to talk to her about last night and she said she would call me around nine on her way home.”

Hearing her suede purr over the phone released butterflies in my pelvic area. I shared my good news about my job to which she congratulated me and told me about her day both at work and at school. A pause fell.

“About last night,” we said in unison, then replied, almost in unison again, “No, you go first.”

Finally, I took a breath and told Jasmine I kissed her because I was really attracted to her and felt like I wanted her to know.

“I appreciate you feeling that way about me and, trust me, the kiss was nice. Yvette, I have to tell you it took me off guard. I mean, I was not expecting you to kiss me, especially after our conversation about your ex-fiancée and the fact you came out to the club to support your friend, that you were not looking to meet anyone.”

“I know, but even if my intention was not to meet anyone, I did meet you and I felt comfortable enough to come over to your place. I had a great time just sitting, listening to music, and talking. I can’t explain it, Jasmine. I just felt like kissing you, so I did.”

“I agree, most straight girls wouldn’t want to kiss a woman they just met. So since I did it, I guess I’m not your typical straight girl.”

As the words rolled off my tongue, the implications hit me in the gut. Did I just say I wasn’t a straight girl? Does kissing a woman make you a lesbian? I didn’t think it did, but then again, did being a lesbian require some kind of entrance exam or internship? Maybe it just involves feeling a certain way and acting on it. If that, I guess I’m a lesbian, or maybe a lesbian-in-training.

“Yvette, in the short time I have known you, I would not say you are a typical anything. I have been a lot of places and I don’t think I have ever met anyone like you before.”

“I will take that as a good thing. Growing up with the superstar known as my twin sister, I had to decide to blend in or stand out so no one would be confused. I decided to go for being as much as a singular sensation as I could manage.”