Jade Cabral strides into the 21st century as a golden guy. Brilliant and beautiful, with a California cool and a Harvard education, he is poised for wealth and success in New York's Financial District.

But Jade harbors a secret flaw, a thirst for revenge against Señor Rodriguez, the California landowner who deprived his father - Señor's out-of-wedlock son, John Virgil -- of his family's rightful inheritance and place in the world. Jade thinks if he succeeds in New York, he can make up for every loss and humiliation his family has endured at the hands of Señor. That searing quest leads him into the arms of Nan Spencer, a lovely, fragile socialite, and to the top of the financial world, the Twin Towers, on September 11, 2001. 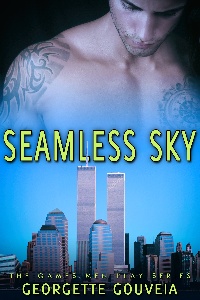 The Old Man's fondness for him seemed to be growing, and Jade decided to cultivate that subtly by turning up for select social occasions that were near and dear to the Old Man's heart and cost Jade nothing. Among these were the various exhibits Brynner & Sons sponsored at The Metropolitan Museum of Art. The Old Man was a trustee of the museum and had an extensive -- and to Jade, who had minored in art history -- fine collection of Postimpressionist and Modern art. Jade looked forward to the exhibit receptions, if not to the self-serving speeches that preceded them. It was all he could do to watch lap-dog Ken Doll as he grimaced and strained to respond to every word from the Alphabet Bosses.

Having had enough one evening, Jade slipped into the background and down the long, airy promenade of the Greek wing on the pretext of looking for the men's room. When he thought about New York later, he thought about this place -- the creamy limestone walls, the encrusted coffers of the Beaux Arts ceiling coexisting happily with the modern skylight, and all those revealing, concealing goddesses. To survive in stone so many centuries later, to offer new eyes what long-ago hands had caressed: Here, he thought, was great love. Here was immortality.

There was something else to admire -- or someone else. In the far corner of the gallery, a woman was looking intently at a stone relief. She had short brown hair as sculpted as any of the marbles and a figure as solidly statuesque as any Athena. She wore a long, sleeveless black dress that almost touched her black patent-leather sandals. A crocheted black sweater in a fishnet pattern had escaped from one shoulder. Two women -- much smaller and thinner, with long, swoopy, supermodel hair -- approached her. They chatted briefly and then walked hurriedly in the direction that Jade had just vacated.

"Well, you know, she was very sick," one stage-whispered to the other.

"I know, but to balloon like that. She must be at least a size twelve now."

As they passed, one tossed back her mane while the other flashed a porcelain smile. To no avail. Jade looked through them in the manner he reserved for those he wished to deflate, while heading toward the woman in question. More than anything, he despised meanness, and he never resisted an opportunity to return it.

Knowing the two skinny Minnies were watching, he approached the woman.

"Beautiful, isn't it?" she said, without turning around. "It's a grave stele for a girl who died, too young. Look at how the curve of her bowed head mimics the slope of the bird she nuzzles. He must've been her pet, and her parents wanted to remember her that way. To think: She died so long ago, and yet there's more feeling here than in many of the people I know."

She turned to him now, eyes glistening, and he realized that the excitement in her face mirrored his own.

"I'm sorry," she said, dabbing her eyes and laughing. "But this is so much better than listening to a bunch of boring corporate types. Forgive my manners. Nan Spencer -- opinionated socialite and frustrated art critic. And you would be?"

"Don't worry, your secret's safe. Anyway, I'm not really the boring corporate sponsor. Just a cog in the tedious machinery."

"Oh, I can't imagine that. You're like this girl. You have that life spark."

"Anyway, Jade Cabral, trader in stocks and bonds and lover of all things beautiful. Shall we run away together? I mean, to the exhibit?"

She wrapped her arms around one of his with a certain conspiratorial relish. "Why not?" she said.