Charlotte Innings is already twenty-one and only getting older with each passing winter as an innkeeper’s daughter when the white-haired, diamond-eyed Aria enters her life. A talented mage hunted by the very organization that seeks to protect her, Aria shows Charlotte glimpses into a world filled with magic and godly forces beyond her comprehension.

Or is it that simple? Aria grows closer to her with each passing day. With each trial, she seems to be opening up to more and more. Her connection to the goddess Cestra. Her magic. Her bodyguard Caen.

When Aria finally unfurls her wings and professes her love to Charlotte, can Charlotte even hope to match her partner’s stride? What can a single farmgirl do against the dangers that surround Aria ... or the demons plaguing her from within? 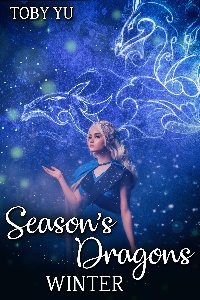 Suddenly I felt Aria’s hands on my cloak, dragging me down. My eyes opened up wide in surprise as our lips met, her arms wrapped around my neck.

For five blissful seconds our lips locked. Her lips locked against mine, as I felt my heart racing a million miles a minute. Was I supposed to do something? Was there a technique to this? Her lips kissed me softly at first, then more passionately. I wasn’t really thinking, so I tried to follow her lead. Her eyes were closed, in a pure passionate embrace as I felt my heart fluttering, like that first time I fell in love with her eyes. Now I was falling for her all over again.

Then it was all over. Our eyes were locked, though only mine was stunned with shock. Her mischievous smile spoke miles, before softening up to a thoughtful smile.

“When you spoil me, I feel my heart racing. When we lock hands, I feel like I’m somewhere I belong.” Her voice was soft, almost a whisper. “As far as I’m concerned, that should be enough.”

“I’m glad.” I didn’t know how to put what I was thinking into words. I was more used to that much slower love, a comfortable love, but I could see from Aria’s eyes that she felt differently. I was her first. As I was coming to terms with everything, Aria’s smile turned into a grin before tackling me into the snowbank.

“Aria, what!?” I began, but I felt her body on top of me, her hands wrapped around me before leaning in for another passionate kiss. This time both of us were absorbed into the act, as she did her best to say what her words could not.

I gave in and leaned into her too, sharing in her passion for the first time. After an eternity, she let me go. Both of us were breathing heavily as she finally uncoiled herself from me, rolling off with a childish laugh.

That was two kisses I was not expecting. I pulled myself up from the snowbank, feeling a warm, toasty feeling on my cheeks. She was beautiful. Her hair was a waterfall of silver, her eyes diamonds in the moonlight. A goddess in the flesh.

“Look, it’s full moons tonight.” Her voice was soft and bubbly, as I took my seat by her side. Her crystalline eyes were glancing up at the sky, scattering moonlight into a dazzling rainbow as she talked.

“When I was younger, I would watch the stars. Maybe there’s somewhere out there where people wouldn’t know that I was a bastard child, or a dragon, or even a Pact Mage. A place where my past didn’t matter.” I felt her body brush against mine, directing my eyes towards the full moons.

“I had been chasing for that place that didn’t exist for so long, only to find out that you can never escape the past. Then I found you.”

She placed her hands on mine, her hands warm for the first time.

“I’m going to try to find a place for the both of us, because I want to belong with you.” She turned to face me again, eyes glittering with hope.

“You’re a hopeless romantic when you’re drunk, you know.” I snickered as I watched her playfully pout before tackling me to the ground again.

“You try being this drunk. Kiss me again, you dork.”

So we kissed, our lips meeting each other once more under the moonlit sky.