Everyone dreams of being a rock star. Dating one is the second best fantasy.

Maggie O’Leary is a lonely lesbian dazzled by the talent and charisma of up-and-coming bisexual rock star, Janine Jordan. A romance with Janine could spell trouble, but Maggie can’t help falling in love.

Set in New York City during the nineties, Second Best Fantasy follows Maggie and Janine as they embark on an exciting and surprising journey together, which carries them through the music scene toward stardom, creative artistry, career satisfaction, and finally, battles with their own personal demons.

With support and encouragement from families and friends, their life seems to be headed down the right path. But Maggie and Janine learn love is seldom simple or easy, particularly when both women are also involved in committed relationships with their own addictions. Theirs is a tumultuous love affair from the start. Can they survive the curves and upheaval along the way? 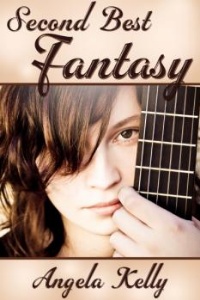 When Janine left for LA two days later, I became solid steel. We said goodbye at my apartment like old friends, and I as-sumed the several times she made mention of when we would see each other again was just her way of being polite.

“Too Much Trouble” had been steadily climbing its way up the Billboard charts, she would be in greater and greater de-mand with each passing day. I was grateful I’d had my three days, it was a nice story I’d get to tell my friends. Beyond that, I convinced myself I expected nothing, regardless of how I felt, or imagined she might feel. Those few days and nights had been magical, but the real world was waiting just outside the door.

Who was I kidding, that day at beach, imagining the rela-tionship would continue beyond our 3-day weekend? It was easier, simpler, and much less painful to pretend it never hap-pened. I set about a rigorous course of action to forget her that included overtime at work and more alcohol consumption and one night stands than usual. Trying to forget someone I had feelings for wasn’t new territory for me, I had a lot of practice over the years. But Janine was very hard to shake. I stopped listening to the radio, her song was everywhere. I was in Pan-dora’s Box in the village and it was on the damn jukebox. One day at work Jan strolled in wearing a Joan Orlean shirt she’d purchased the night of the party. I felt the universe was fucking with me, and I didn’t like it one bit.

About ten days after we’d said goodbye, I came home from work and a stuffed manila envelope fell to the floor as I was sifting through my mail. The return address was somewhere in LA. I sunk to the floor and started to cry, Janine had not for-gotten me after all. Smiling through my tears, laughing at my silly attempts to deny what I felt, I tore open the package. The first thing to fall out was a CD single of “Too Much Trouble” with Janine’s script in black magic marker sprawling across the cover that read, “To my Jersey girl.” If that had been all the package contained, I would have been overjoyed, but there was more. A photograph from a shoot for the next album cover showed Janine half smiling at the camera with the boys in the band surrounding her on all sides. A sheaf of cocktail napkins with random lines and paragraphs of poetry, and a note on the last napkin that said, “You’re helping me finish this when I get home.” And, finally, a brief letter:

I am sure the moment I walked out the door you thought you would never hear from me. My dear girl, so scarred from past betrayals, I under-stand your fears. It seems so unfair that the moment I found you, this cor-porate world of music wants to swallow me whole. I never really wanted to be a rock star.

I think about you every moment alone I can steal. There is something deep within me that wants to tell you all my secrets. I’m sorry I haven’t called, it is hard for me to get away on my own for any length of time. I just keep thinking of how much sweeter it will be the next time I get to see you. I wish I could see your face when you opened the package. You probably had that little grin that starts at one corner of your mouth and spreads across your face like an artist’s hand.