Second Star to the Right (MM)

Be it unrequited fascination with his straight best friend or impossible fantasies of rekindled interest with his heartbreaking ex, Mason has no clue why the perfect connection seems to keep slipping through his fingers. When another lonely holiday seems like too much weight to shoulder, Mason gives up on romance and seeks out the next best thing -- rented company. Jack is everything a person could want in an escort: willing, hot, and built like an angel.

Mason can't resist. After all, who wouldn't be interested in a guy who loves kid's movies, is a self-professed Peter Pan, and has no problem throwing caution to the wind at a moment's notice. But then interest quickly blooms into a whole new emotion -- an emotion that Mason knows far too well, especially when Jack has no interest in returning it, preferring to keep his heart safely tucked away in Neverland. 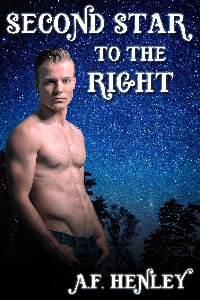 Second Star to the Right (MM)

The most stunning blue eyes out of all the blue eyes that Mason had ever lusted over peered through the car and held his own. The scent of cologne -- some odd mix of sweet and green -- filtered through the space to tease at his senses. Underneath worn denim and a threadbare tee, muscles rippled with every move the man made.

Mason opened his mouth to speak, to confirm that the universe wasn't just playing some cruel joke on him, that it was, indeed, offering him this being, when the man cut his attempts at speech short with a bored, disassociated voice that seemed so very inappropriate for the character it resided in.

Mason nodded quickly, doing his best to counter waves of alarm with silent prayers of worship and thanks.

Once again the monotone of disinterested resignation broke into Mason's stream of thought. "You wanna pop the trunk?"

He jumped into action, hitting the button as fast as he could manage, and then trained his eyes on the rear-view mirror so he could watch the man walk to the back of the car. Mason didn't even bother to flinch at the shove the man gave the trunk, smiling at the way the hydraulics caught the overuse of force and nudged the lid into place. He watched the man watch it happen, smile growing at the appreciation he saw there, ridiculously gleeful over the fact his car was being appraised, and he didn't lower his attention again until the man was drawing himself through the passenger door.

Mason took a quick breath and turned a half-inch towards the man, opening his mouth to offer some kind of greeting and was once again denied dialogue.

The words were defiant though the tone was still flat, and Mason swallowed back a nervous laugh. "Oh. Well. It's a long drive. Out to the lake. We're going to the lake. Did Amelia tell you about the lake?"

His mind screamed at him to shut up, his sense of self begged him to get a grip, but no matter how Mason tried he couldn't stop himself from sounding like a complete and utter idiot. Not even when the man huffed a reply that Mason could only take as "Of course she did, what are you fucking stupid?"

Then as quickly as Mason's tongue had stopped, it started back up again. "It's going to take about three hours. Long drive. Kind of. Longish."

Had the man known how desperately hard Mason was working to make himself stop, he probably wouldn't have offered the withering look that he did. Yet Mason's guts twisted and he felt like he shrunk six inches into the seat when the man turned to stare in aversion.

"And? What part of that reasoning suggested that we couldn't leave at noon? Was there something you desperately needed to be part of between, say, ten a.m. and two in the afternoon?"

"That's what I figured." The man shook his head and looked away. "I am already not pleased. I don't do mornings. Seven a.m.? That's fucking ridiculous." He lifted a hand to hold up one finger. "No more seven a.m. Or I leave this car right now."

"I ..." Mason frowned. This was crazy. Wasn't he supposed to be the customer here? What kind of trip was this guy on? He lifted his eyes, huffed at his passenger and caved like a wild animal crossing a grass-covered trap. "I swear."

"Good," the man pulled his sunglasses off the neckline of his shirt and flicked them open. "So then. Let's go over the rules."

"Everybody's got 'em, buddy." The man shuffled in the leather seat, apparently finding the most comfortable spot and Mason found himself dragging his eyes again and again off the way denim encased lean, slim thighs, and perfectly shaped crotch. "Even whores."

"So, here's the deal, champ." The man flipped down the visor and began to scrutinize himself in the mirror, smiling briefly at the little light switch he found and sliding it on. "No more than twice a day, see? I don't care when, I don't care where, I don't care how, but your limit is two." He abandoned his reflection to lift a hand and start counting points on his fingertips. "Two: You will not wake me before ten. And seriously, that's more for your own safety than anything else. I cannot stress enough that I can be a real bitch in the morning."