Secrets of the Tomb

Natasha has been plagued by dreams of Egypt for years. Taunted about her weight by her classmates, she throws herself into her studies. Spurred on by her obsession with all things Egypt, she enters a competition and wins a trip to Egypt to work on a dig with archaeologists. As a precondition, she must lose weight to meet the physical requirements of the trip.

Her need to lose weight fast leads her to a hypnotherapist. Under hypnosis, she discovers she once lived an extraordinary former life as Tilia, a serving girl to Princess Zenithia of Egypt.

As her incredible journey begins, she discovers who she was, who she is now, and who she will ultimately become. 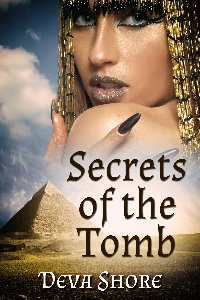 Secrets of the Tomb

“Make yourself comfortable, just relax,” Eric said in a soothing voice. “I want you to stare at the yellow sun that's there on the wall. While you’re looking at it, I want you to imagine lying on the floor of a rainforest. All around you are beautiful earthy aromas. The trees, plants and earth that are surrounding you are actually like a giant bed, soft and warm.”

Natasha did as he said. She allowed herself to relax, her body to sag, her mind to clear of everything else but Eric’s voice.

“The sun coming in through the treetops is warming your face and body. Breathe in deeply the wonderful fragrances. Listen to the soothing sounds of birds twittering, leaves rustling and the humming of bees as they go from plant to plant. Your eyes are growing tired and are feeling quite heavy. You can close them now, close them knowing what is surrounding you and feel safe, secure. There is nothing that can harm you. Feel yourself relaxing more and more. Concentrate on the sound of my voice as you drift deeper and deeper. Imagine yourself going down some stairs, deeper and deeper into your subconscious where everything is calm and serene. Are you feeling peaceful, Natasha?”

Eric watched her for signs. He’d been taught to make sure the patient was absolutely under before attempting to have them regress.

“Good. Keep breathing deeply, relaxing even more as you do,” Eric said, checking his video equipment, making sure she was in focus and the tape was running smoothly. “Now Natasha, I want you to go back in time, back as far as you can to where you are only fourteen years old and you are very hungry. The first time you can remember being really hungry. Can you do that for me?”

“Natasha,” he prompted. “Do you remember a time when you were very hungry ... a time perhaps where you had no food to eat?”

After a moment or two she began to cry. A slow whimpering, then more of a howling. Before long she was sobbing, speaking in a foreign tongue.

“Natasha, Natasha. You must speak in this language. Speak in English for me, can you do that?”

“It’s okay, Natasha, you’re safe, nothing can harm you. You’re not really hungry, you’re just remembering it. Take a few breaths and relax, that’s it.”

He watched her gradually stop and when she was calm, he began again.

“I'm locked inside the tomb.”

“I have lived fourteen seasons”

“Yes, Princess Zenithia has gone to the gods. Somehow I was locked in.”

“You were accidentally locked in a tomb?”

Eric ran his hand through his hair. Could this be true? Could she have been accidentally locked in a tomb or was she a sacrifice? Egyptians did that. They buried their slaves with them to take to the next life.

“Yes. Princess Zenithia’s. I want to get out,” her voice rises. “I am hungry and frightened. No one can hear me and even if they could, they would not be able to get me out.”

“Why wouldn’t they be able to get you out?” Eric moves about the room, wondering if it’s a good idea to have her continue. Perhaps this session could backfire on him if she gets too distressed.

“The chamber doorway was sealed with stone. The priests placed a curse on anyone who would dare break into it.”

“You're locked in a tomb with a body, is that what you're saying?” Eric begins to take notes, scribbling down questions he doesn’t want to forget later. He checks to make sure the video camera is still on and then sits back down in front of her.

“My name is not Natasha. It is Tilia and I have been entombed inside the chamber of my mistress, Princess Zenithia.”

“Are you in Egypt, Tilia?” Eric asks gently.