It’s no ordinary morning when Toni Starr arrives at Zach’s garage. Flat broke, with a past she won’t share, Toni’s instantly taken by such a potently virile man. Direct and unashamed, she tells him she’s a motorcycle performance artist who needs work and knows motors.

Zach knows women, and Toni’s unlike any he’s met. Lushly sensuous, exceedingly assured, she’d easily be his match in business and bed. A provocative challenge that stirs him as nothing has since losing his wife. A chance he’s reluctant to take, offering no more than a month’s employment, then she’ll have to be on her way.

The hours tick by. Each word and glance intensifies their denied yet escalating desire, forcing them to surrender to passion. Driven by carnal hunger, conquered by yearning, they face the unforeseen truth of Toni’s past and a future neither of them expected. 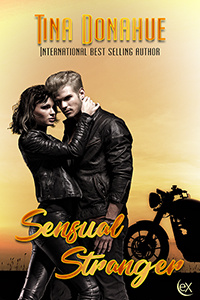 Toni Starr propped her shoulder against a storefront on the deserted street, ignoring her thirst, the heat, and her weariness. For too many years, she’d yearned for a place to call her own where she’d always belong.

Wouldn’t happen in this small town.

Hopefully, the automotive service shop across the street would open before a merchant, or worse, a cop showed up and ran her off.

Please, not that. She couldn’t walk another step.

The metal doors for Brody’s Auto Repair rattled upward for the day’s business.

Her pulse picked up.

A man inside the building gripped a clipboard holding numerous papers. The bays were empty except for cars, no other employees having arrived. Nor were there any customers waiting at the glass door in front.

An old Tim McGraw tune poured from inside, the singer’s resonant voice subdued by heartache.

Her fatigue and uncertainty retreated, replaced by interest in the man. Surely over six feet, he looked early thirties or so and filled out his white cotton tee and worn jeans nicely.

She managed a small breath.

Solid didn’t begin to address his broad shoulders, sculpted chest, and muscular biceps. Faded denim hugged his powerful legs, and the meaty bulge behind his fly.

Her mouth watered despite the worsening heat and the mess she was in.

He turned to the side, taking his best parts from her view.

Disappointed, she craned her neck.

Blond locks streaked his light brown hair, worn longish on the top and sides, wonderfully tousled as if he’d finger-combed it after he’d rolled out of bed.

Her stomach fluttered, and her thoughts roamed at being in his strong arms, safe from hurt the world seemed determined to inflict. His big body pressed close, hard, and protective.

He strode to a Saturn in the middle bay, favoring his right leg. Not a limp exactly, more a hesitation in his fluid gait. The way a man would walk after straining the muscles in his calf.

Pain flickered across his handsome features, followed by what might have been sorrow or regret.

As quickly as the emotion surfaced, it passed. His face grew impassive, all business, his attention torn between the car and his clipboard, then something to the left in the work area. Crossing it, he again depended more on his right leg, stopped at a small refrigerator, and pulled out a bottled water. He placed it on a waist-high metal cabinet that likely held tools. Forearms on it, he bent his head to the papers, reading the first then the next.

She couldn’t tell if he owned the place or simply managed it. More importantly, whether he’d listen to her and have the authority to do what she needed.

Desperation returned. Perspiration trickled down her cheek. She squinted at the unforgiving sun streaming over distant mountains and past the flat-faced buildings on her side. Those rays hit the garage full-on, bathing it in the light, seeming to direct her.

Go on. Before anyone else shows up.

Queasy with uncertainty, she pushed away from the gift shop. The small downtown area was quiet, the other storefront businesses closed. No cars rolled down the narrow two-lane street. No locals or visitors noticed her. Nor did he. His focus remained on the papers, shoulders relaxed.

He pushed a wayward lock behind his ear.

She liked his hair and battered cowboy boots. They fit him as well as everything else did in this town. He belonged. She didn’t.

Too late to turn back now.

With the sun at her back and her heart pounding, she trudged toward him.