Silver in the Second Temple (MM)

Set in the All Cats Are Beautiful universe.

The Firmament Foundation has numerous vessels in deep space, but only one is on a secret quest to discover the divine. As the Droste nears its ultimate destination, things start going wrong. Very wrong.

Dr. Silver Ballard, a neurotic gay Jewish mess with zero astronaut training, finds himself in the unenviable position of deciding the fate of the mission. Can it be saved? Should it be saved? And if the gods of old are all powerful, does he really have a choice? 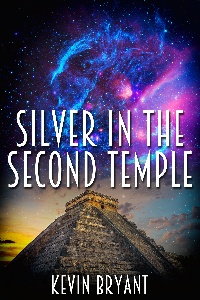 Silver in the Second Temple (MM)

The back of the transport was cold. It held four Foundation troopers, locked against the walls by safety bars that resembled a theme park ride. The legs of each trooper was spread ever-so slightly, to accommodate a small cage.

Silver looked at the cages, each detachable cage held the trooper’s individual homunculus. While everything within the life of a Foundation trooper was prescribed and predetermined, issued for maximum efficiency, their homunculi were individually chosen. As their sole professional personal-expression, these troopers were usually very attached to their homunculi -- or “Ques,” as they called them.

Silver wasn’t a military man. But he did appreciate the armored ape’s devotion to their Ques. There was plenty of evidence to prove that the relationship benefited both parties.

He looked between his own legs, down at the cage fixed to the transport floor. As Head of Behavior Programming for the Foundation’s space division, he was not offered the opportunity to freely choose his Que. His role required a specialized homunculi, known to most as a Talion.

The Talion looked like a miniature lion from the front. Its rear end was a horrific floating, pulsating sack of flesh that held the creature’s second brain. This second brain was what gave the Talion its ability to control other homunculi. Silver detested the word “psychic” due to the associations with fraudsters claiming supernatural powers, but that was the official term the Foundation used.

Looking down from above, Silver remembered how disgusting the thing looked. It was the reason he usually consulted with the homunculus from the front. The lion’s face and hint of something else behind it, giving the appearance of an angel or demon from some esoteric text.

Silver could tell he was getting anxious as his thoughts had begun to contradict themselves again. Disregarding any positive or negative associations with psychics, demons or the classically unexplained, he let out a long, controlled breath.

“... take the Lord’s name in vain, you fucking ass!” He missed whatever comment prompted one trooper to loudly scold the other. The offended party turned to him and gave a reassuring look. It did not work.

“What’s the matter, Doc?” shouted the trooper, desperate to be heard over the noise of the engines but still carrying some genuine concern in his voice.

Silver shuddered. A mixture of the cold and the very real threat of small talk. He smiled and hoped that was enough.

“I know we’re not supposed to talk about these things, but a Code-Brown? What’s going on?”

“I’m afraid I know less than you,” Silver shouted back.

“Normally I’m a lot calmer, but something’s got my Billie spooked. Whatever this is, they -- the homunculi, I mean -- they know it’s not right.”

He looked down, between the trooper’s legs. Curled up in the cage was his homunculus, Billie. Billie was an XF-C class, a Cherub. A tiny, slightly disproportioned human child with feathered wings physics would never allow to be used for flight. The wings were actually delicate olfactory antennae. Like the hunting dogs of old, these Cherubs were the perfect partners for troopers assigned to search teams like this one.

Attempting to be the Silver of the daytime, the friendly mask fell into place somewhat reluctantly in response to the uncomfortable cold and noise of the transport.

“Billie is a great Que. I can tell you two are a good team,” he shouted.

The trooper smiled, the marker Silver was looking for to tell him he was on the correct social path. He continued. “The Cherubs are real sensitive on so many levels. Billie is probably picking up on all of our apprehensions and fears. I’m sure it’s going to be okay.” He gave a thumbs up for emphasis.

“Thanks, Doc! When this is all over I’ll buy you a beer!”