They met and loved passionately in a time of revolution.

Anne McIntyre, a schoolmistress in the Pine Barrens of New Jersey at the outset of the American Revolution, is serious-minded, intelligent, and patriotic. Anne supports her sister in her marital problems and helps the ironmaster’s widow manage a difficult situation with her daughter.

Peter Kensington should have been an earl, but thanks to the duplicity of his younger brother and his own reckless nature, he has ended up an officer in the colonial war. Spying is alien to his gentlemanly code. Yet he must do exactly that. Anne is suspicious of him from the first but as passionately attracted to him as he is to her. 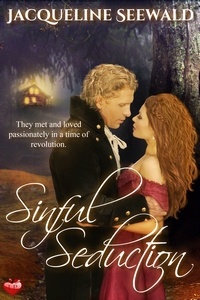 HE STOOD outside looking up at the window, watching her brush the long, auburn tresses that fell in great coppery waves. She had fine luxurious hair that he itched to touch. She looked like a beautiful angel in her white gown, her face calmly composed in its loveliness. He was overcome by a rush of lust. He wanted her naked and willing beneath him, her eyes dark with desire for him.

From the moment he saw her confronting the highwaymen, he desired the woman. He had never seen any female show so much courage. Her brown eyes were hot, molten lava, her cheeks burning vividly scarlet. The sight of her had moved him powerfully. He came to her aid without a moment of hesitation. Without thinking the matter out as he knew he should, he now went to the door of her room and knocked. He could hear her stirring within.

“Who’s there?” she called out.

He knocked once more without answering and then was rewarded by the sound of the door opening.

“Delia? Oh, Mr. Smythe. I am surprised. Is there something you wished of me?”

“May I come in for a moment?” he asked. He saw the color flame in her cheeks and understood she was not indifferent to him.

In her large, dark luminous eyes and in the fullness of her sensual mouth, he discerned a passionate nature. She could try hiding it, just as she hid her magnificent hair under a mop cap, but he was too experienced with women not to know that there was tremendous depth of emotion here. He fought the urge he felt to seize her in his arms and kiss her firmly on those soft, full lips.

She was staring at him now, waiting for him to offer some explanation for his presence. He sensed her uneasiness.

“I only wanted to tell you that it would seem both armies are rapidly moving in this direction. Try to hurry your friends so they will not remain here unduly.”

“That may be difficult, Mr. Smythe. Delia is truly ill. However, as you say, these are bad times. I thank you for your concern.”

She looked as if she would close the door on him.

“May I stay and talk with you for yet a few moments?”

“Mr. Smythe, as you can see, I am in my nighttrail, and that would be most improper.”

He watched the rise and fall of her breasts, and his groin tightened. “Sometimes, madam, a man needs to be improper.” He spoke boldly, thinking that it might heat her blood.

“Mr. Smythe, I think you are more rogue than gentleman.” She moved forward as if to usher him out the door, but he quickly pulled her into his arms and kissed her mouth, pressing his lips forcefully against hers. He could feel her full breasts yielding against his chest through the soft cloth.

She let out a small gasp and then quickly pushed him away from her. “Sir, if I have given you any cause to take such liberties with me, I do apologize. I fear you have misunderstood me. I am promised and cannot entertain your affections.” Her cheeks danced with color.

He felt like a starving man beholding a feast. “To whom are you promised?”

“I see, and you plan to marry soon?” His voice thickened.

She hesitated, and he studied her carefully. Perhaps she was not as set on marrying the clergyman as she claimed.

“Please leave me, if indeed, you are the gentleman you purport to be.”

“As you wish, madam, but I never claimed to be a gentleman.”