Sisters of the Secret Conspiracy (MF)

Desdra Von Cleef has a deep, dark secret, one which she has taken great care to hide from all but her closest comrades. But war soon envelops Georgia, and only when General Sherman's Northern troops burn Atlanta and march toward Savannah, leaving a swath of destruction in their wake, does Desdra and her lonely, war-widowed "sisters" dare to reveal their true natures to save their homes.

When a squad of Yankees, under the leadership of the dashing yet ruthless Union Major Canaan Abbott Scarborough, arrives at Raven's Peak to burn and pillage, they get a whole lot more than they bargained for from Desdra Von Cleef, the plantation’s owner, an alluring and welcoming Southern belle.

Instead of burning down the mansion, stealing Desdra's many treasures, and taking liberties no gentleman would consider, the Yankees find themselves recruited into a secret confederacy -- with Desdra and her "sisters in blood" firmly in charge ... 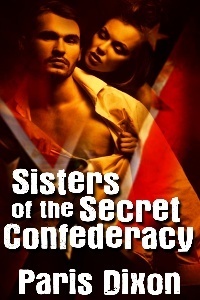 Sisters of the Secret Conspiracy (MF)

“Are the others prepared?”

“I see you have had your fill, dear one?” said Desdra, her words more of a statement than a question. She teasingly lifted a brow. “Did I not predict as much?”

“All right, Miss Dessie, I promise never to doubt you again. Wasn’t half bad for a wicked Yankee, either.”

“I s’pose so. But do you still intend to go ahead with your extra devilry?”

“Devilry is all in the eye of the beholder. For instance, to the Confederacy, the actions of the Yankee army are nothing short of devilry at its finest, yet to the Union, those same deeds are righteous, a way of ending the war as expeditiously as possible. A worthy strategy, I grudgingly admit, on General Sherman’s part. He is an intelligent man. Make us Southrons hate war so desperately, that we force President Davis to call for a truce ... yes, quite intelligent.”

“And your plan? I would hardly call it intelligent, if you’ll not mind me sayin’ so.”

The quadroon’s eyes momentarily displayed sympathetic understanding. Yet her face once again twisted into a perfect replica of an admonishing schoolmarm. “Surely you could try to recruit a nice Southern gentleman to --”

“From where, my darling Narcissa? You know as well as I, this ugly war has bled the South white, if you’ll forgive the expression. I have no other choice ...”

The riders approached the circle in her driveway. During the summertime, a center garden housed the multi-colored and fragrant blooms of alyssum, mignotte, and sweet pea. Now, only dying foliage remained, patiently waiting for next year’s rebirth. The men rounded the paved circle from either side and haphazardly halted their steeds before the porch.

Desdra placed a generous, inviting smile on her lips and attempted not to breathe too deeply, for their robust masculine tang had the capacity to overwhelm. In her present state of wanton need, it would be too easy for her to relinquish her common sense, abandon all restraint, and invite each and every one of these soldiers into her bedchamber, allowing one hard cock after another to invade her most intimate places.

But that wouldn’t do, not with the plan she had in mind.

One by one, she hastily eyed her would-be conquerors, assessing their physical characteristics like a horse breeder searching for the perfect prize-winning stallion, and clamped her gaze on one man in particular. Something about his bearing, his wide shoulders and solid build, the way he sat his saddle, arrested her eyes. And when she gained a clearer view of his face, she knew she had made a commendable selection.

Appearing to be in his mid to late twenties, he cut a dashing, almost regal figure, with his longish dark brown hair, side-whiskers, drooping mustache, and chin beard. His intelligent forehead, high cheekbones, and patrician nose told a history of hardy stock. And the fire lurking in his gray-green eyes, his lean and muscular build, and the sizable bulge at his groin -- a wicked triumvirate of the most luscious order -- indicated in no uncertain terms his prowess as a stellar lover.

Desdra could certainly picture giving herself to a man who looked like him day after day, year after year, century after century. A handsome mate to share her life once again. Through her mind flashed vivid fantasies -- peering into that princely face as they rutted like wild beasts, kissing those generous lips and merging her tongue with his, crushing his sinewy physique against her writhing body. And just the notion of sinking her fangs into his throat, feasting on his life’s blood and having him do the same to her as he simultaneously filled her core with his hot seed to become her mate ...

She shuddered at the reverie, knowing she could not have wished for a more resplendent male to arrive at her door. Her womanly channel started to weep uncontrollably with her juices, as if applauding her decision and begging her for haste.

Desdra also realized her extra good fortune when her chosen candidate lifted his hand and ordered the others to dismount. Their leader! She had always preferred a strong, capable mate, one who wasn’t afraid to take command, especially in the bedchamber. That hale constitution would also make his transformation and subsequent adjustment much easier. Her mouth watered at the prospect of tasting every inch of this creature, of savoring his lush, heated juices, both milky white and blood red.