Barrel racer Becca, frustrated because COVID has shut down all rodeos, is annoyed when Nikki, the farrier's daughter, shows up in his stead. They spar over Nikki's competence and their different ideas of social distancing, yet eventually bond over their mutual love for horses.

Since Becca doesn't have Nikki's number but wants to see her again, she resorts to requesting another farrier visit. Nikki sees through her ruse and retaliates by using the water hose on Becca, yet they still hang out.

Their first real date threatens to fall through when Nikki's trailer has a flat and she shows up for their trail ride without a horse. Becca has brought both of hers, but, because of a bad experience that caused one of her horses to get hurt, never lets anyone else ride them.

Falling for the idea of someone can happen in sixteen seconds. But can Becca find the courage to take her real life chances on Nikki? 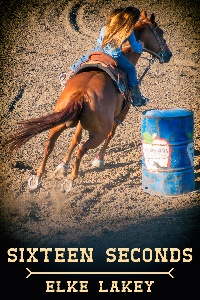 "What do you mean? Aren't you the owner?" She checked her phone again. "I'm supposed to ask for a Rebecca Miller."

"At home. My dad was exposed to COVID last Friday when he went to the Rose Palace, which means he can't work until at least Friday, another week from now. And that's provided he doesn't have any symptoms. So, are you going to show me where your horse is or what?"

Heck, no, she wasn't! Glaring at the stranger, Becca did come out of the house, though, only to have the stranger step back several paces. "What? It's not like I have COVID."

"Yeah, sure. But I can't work on your horse if we don't social distance and all that. My dad made me promise."

"I don't want you to. Em, no, that's not what I meant." Becca coughed in order to cover her embarrassment and the stranger stepped back even farther.

"What do you mean then? My dad said your text sounded super-urgent."

"Well, Jetgirl did lose her shoe, and she's always really gimpy when she does, but ..." Becca coughed again, not for the first time using her allergies as a cover up.

"You don't let just anybody work on her." The stranger said it politely but Becca was sure she detected a smirk behind the mask.

"No, I don't." She stepped toward the stranger and the stranger stepped back again. Frustrated, Becca took another step and so did the stranger, until they both resorted to glaring.

"This is silly! I didn't drive all this way just to play games with you."

"And I'm not about to let some stranger touch my horse's feet. I bet you're not even a real farrier."

"Fair enough, since I never had any official training. But I've watched my dad shoe horses since I was about this tall." She motioned toward Freckles, indicating his size. "And, believe me, over the years I've helped my dad plenty. By the way, I'm Nikki." She extended her hand toward Becca only to pull it back again. "Sorry. I'm not used to not being able to touch anybody."

"I know! I hate all this COVID stuff. It sucks not being able to hug people."

"Okay." But Nikki just stood there.

Becca, who'd been about to close the door behind Freckles, gave her a look that said my house, my rules, but Nikki waited, seemingly unperturbed until Becca went back in and slipped her mask on. Made out of one of Becca's old pillow cases, it was pink with black horses on it and her mom had sewn it just last week.

"That was nice of her. Okay, so the mask is a bit lame, but you can definitely pull it off."