Attracted to a woman he shouldn’t be, all because of the color of her skin, Sheriff Christopher Weatherby is conflicted, unsure of what to do with the passion that is building inside him. It is his job to help Lillian Pearl Porter solve her parents murder, but as the truth starts unraveling, it seems secrets are around every corner, all involving the woman he finds himself drawn to.

When Lilly returns to her parents’ hometown after their deaths, she is met with the racism, discrimination and secrets that surround the small town of Kittrell, North Carolina. Determination flows through Lilly as she ventures on, fighting against the walls of segregation. She finds herself falling for a man who is forbidden. A love so strong that it pushes against the laws.

Will Lilly and Christopher be able to control their love or will their attraction end, just like Lilly’s parents—in death? 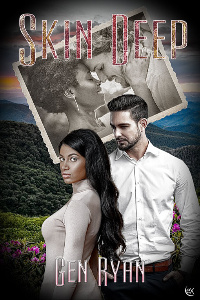 “You think just because you shacked up with a white man, I won’t whip your ass?”

I glanced up. His grin spread across his face as though he’d won the lottery. I suppose I was his winnings. Me, Iris Porter. The woman who loved the wealthiest man in Kittrell, North Carolina. Normally no one would bat an eye, but I’m black and I used to be a servant in the house of the father of my partner, Charles.

My skin isn’t too dark, like coffee when you add a little cream, so I’d been lucky to be a house servant. I hadn’t made a lot of money, but I had been treated decently. Charles and I fell in love the moment I stepped foot in his house. We didn’t see differences—skin color, social class, or anything else. There was just us and we were in love.

But that was decades ago. That time had been even more challenging than it was now. More hate, more violence.

As I clung onto the tree, parts of my body exposed, the hate and fear I’d experienced all those years ago resurfaced. I’d never experienced violence, but my mother had told stories of her father, her brothers, all suffering physical and emotional torment through times that I was thankful not to have witnessed. The stories were enough to bring me to tears and to question how humanity could be so cruel. I had thought times were different now. The violence not as rampant, whipping a thing of the past. It was meant to be, but now, as I was being lashed, I imagined how my ancestors felt—my father who I had never got to know, taken from this world too soon, all because of the color of his skin.

The whip struck me, and a trickle of blood wept down my back. The pain was unbearable, and I forced myself not to cry with each strike. I bit my lips so hard they cracked and bled under the pressure, but I didn’t make a sound. I didn’t want to give him the satisfaction.

“Please stop this. We’re leaving. We won’t come back. I just wanted to bury my father.” I turned my head and saw Charles, my soulmate, the man I was forbidden to love. Tears streamed down his face. He was tied, there we no marks marring his skin, but I knew his torture was watching me as each strike hit my body. I gave him a strained smile as a tear escaped my eyes.

The years had been kind to us. Those years had blessed us with a daughter, Lillian Pearl Porter. She was twenty-three, beautiful, kind, and determined. I was proud of those traits, but also scared. Scared of her determination and how she would react when she found out what had happened to her father and me. She wouldn’t let it go, and I feared more for her than I did for the pain I knew I had yet to endure.

“You made the mistake of coming back here. Flaunting your sinful relationship.” He laughed. “At least you didn’t bring that daughter of yours, Lilly.”

I fought against the chains that bound me, and Charles wrestled with his at the sound of our daughter’s name. The man who held us captive had hit a nerve, and by the sly smile that formed on his face, he knew it too.

“Ahh.” He swung the whip in his hand. “Lilly is her name isn’t it?” He moved closer to me, his breath sour from all the alcohol he’d drunk. “If she’s half as beautiful as you, I can’t wait to get a taste.” He lashed my open wounds with the leather, each strike more painful than the last. I still didn’t make any noise, though, even at the mention of Lilly. I had learned from my mother, and that lesson had forever stuck with me.

Don’t make a sound. Never let them know your pain.

Another crack of the whip sent me further into my mind. I thought of Lilly, when she was younger. Her pudgy face, her carefree childhood. She had grown up in a place where she’d been loved and respected regardless of the color of her skin. Things weren’t perfect. We had dealt with racism, but it wasn’t as bad as it was in the South.

“Please just let her go.” Charles fought against his chains, the rattling bringing me out of my daydream. “Why are you doing this?”

“Because. This shouldn’t be. You two shouldn’t be. It’s a disgrace, and your damn father should have taught you a lesson when he had the chance.”

“My father didn’t agree with my choices when it came to Iris, but he let me go. Because although we disagreed, violence, lynching, killing, it was never an option,” Charles replied. “So, let her go! Take it out on me. Whip me.”

He smiled, and the breeze returned and bent the trees. They swayed sympathetically, creaking under the pressure of the wind. They were like my body, molding, threatening to break at any moment with each crack of that whip.

“Charles, It’s okay honey. It’s going to be okay.” Our eyes met. The kindness, the love I had seen the first day I laid eyes on him, still there, just more of it. More profound, more sincere.

“Don’t leave me, Iris, not yet,” Charles whispered.