Dounia and Ira are part of the Nightwitches, an elite squad of night bombers determined to help bring down Axis forces. When Dounia's sister Tanya joins the army, Dounia doesn't react well out of concern. When Tanya disappears after an Axis attack on their base, it looks like the situation will end in tragedy.

Unfortunately the war doesn't stop for personal tragedies, and the dangers of battle are ever present. Dounia and Ira's plane goes down behind enemy lines, and Ira is injured. Will their determination and courage be enough to see them safely through? 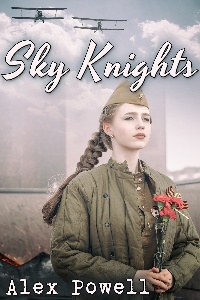 "What?" Dounia strained her ears. "I can't hear them."

"Why have they launched planes?" Ira asked, scanning the sky ahead of them.

"They must realize that on such a clear night they'll be able to see us more easily," Dounia said, and then, she could hear the low thrum of their engines.

"Because that's going to do any good in a moving aircraft," Meow said sarcastically, ears flattening.

"We're going in first, so gain some altitude, will you?" Ira commanded sharply.

"The German pilots will see us," Dounia hissed in return.

Dounia pulled up slightly, but not as far as Ira wanted her to. The Messerschmitt's stalling speed only worked in their favour in close-quarter dog fighting. Ira told her the coordinates tersely, but didn't order her to rise any higher.

"Are they waiting for us?" Meow asked, green eyes glinting in the moonlight.

The enemy planes appeared ahead of them, and anticipation tightened in Dounia's stomach as she got ready for some intense manoeuvring. Ira snapped out their closing distance, and Dounia dared to bring them up and into the line of sight of their enemies.

Suddenly, the spotlights came up, highlighting all their planes and exposing them to enemy fire.

Dounia blinked hard against the abrupt glare, and then jerked her controls automatically at the staccato firing of the machine guns. The Germans had spotted them and were coming in fast and hard. Dounia zigzagged across the sky, trying to shake the spotlight following her.

"Fifty meters and closing," Ira said urgently. "Dounia, we don't have enough altitude. We'll have to circle back around."

Circling back around would expose them to more enemy fire. Dounia clenched her teeth hard and swooped in, aligning their aircraft with the target below.

They weren't high enough, and the Messerschmitts were swinging back around. They were lit up from below by the spotlights, and puffs of smoke burst all around as the anti-aircraft guns fired away at them.

Heart pounding, Dounia hit the release button for the bombs they carried and they dropped away. A moment later, shrapnel ripped through the wings of their plane as the anti- aircraft guns found their mark. The roar of engines ahead of them intensified and the Messerschmitts came back around, firing in point blank range, doing as much damage as possible to their forces.

More bullets tore through their craft. The sound of tearing wood and canvas was extremely loud in her ears.

Suddenly, an explosion rocked the plane, the concussive blast throwing them violently off-course. The plane shuddered violently, and the frame, already weakened by the machine gun fire, started breaking apart in midair.

Ira was screaming, and they were descending far too rapidly. The trees rushed up at them and Dounia tried futilely to pull up. The aircraft was unresponsive beneath her hands and dipped uncontrollably towards the forest below.

There was no time to tell him about the obviousness of this statement, because within moments they crashed into the tops of the trees. The wings crunched dreadfully as they hit the resistance of the branches around them. For a second, the branches were breaking with a high-pitched snapping noise, but then the plane shuddered again and groaned painfully, right before the wings tore straight off.

All the spells that were holding the plane together shattered all at once. The last glimpse Dounia got of Ira was of her clutching Meow tight to her chest and bracing herself against her control panel. Then, something flew at her sideways and struck her across the forehead.