At his older sister Didi's request, Pete Garhart makes a reluctant trip from Miami to small-town Ohio for his father's funeral. Beyond the sun, he leaves little else behind. Alcohol has drained any momentum from his culinary career as a chef, and he's been reduced to line cook at Applebee's. His string of failed relationships have begun to resemble a line-up of wooden soldiers, all with great guns and the same fade haircut. And, now in his late 40's, he's painfully aware of enroaching invisibility in his own community.

Back in his hometown, he's battered by flashbacks of an anxious adolescence and his father’s rejection of a queer son, yet also finds the house he grew up in renovated and the town itself shorn of other memories. But bigger revelations are yet to come, including an unexpected hot tub reunion with a straight high school crush and a road trip back to Florida with Vantage Blue-loving Didi. She has a few things she wants to get off her chest about their own sibling alienation, but the surprise may be hers when Pete opens a floodgate of his own admissions. 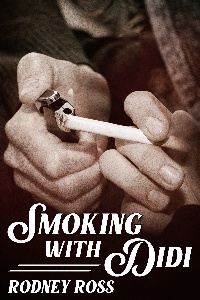 Farraday Wine and Spirits was walkable, maybe two miles. He hadn’t produced breath that could be seen for a while; maybe it would prove he was still alive. He found a faded blue pea coat of his father’s, among many of various lengths and style, from the hallway closet. There was a Cert, remarkably intact, in an interior pocket, but none of the cash Didi intimated might lurk there. So much for hoping his father’s dementia would grant him a few bucks toward a morning cocktail.

Freeman Avenue had been their everything, their little world, the street where he and his sister had shed training wheels and violated curfews. He could hear the echo of his mother calling them home on stifling summer nights with “Dad brought home onion rings!” Never mind that they were sodden and fished out of the fryer at the end of the Friendly’s dinner seating. Leftovers were always a treat.

On Freeman, relationships had been so simple. Everyone was a friend. Expectations and skirmishes were uncomplicated by social media maulings, you didn’t have to interpret “tone” in a text and people came together without an e-mail chain, like the afternoon when some neighborhood kids fanned out to search for a pet white rabbit that had escaped her cage. Whoever found Misty, as the handbills named her, promised to equally split the fifty dollar reward (Misty was never located). What an accomplishment it had been to cross the two-lane street alone and reaching the other curb. It had seemed so expansive then, like looking across to another shore, a trek into another land.

Freeman Avenue was where Pete had even spied Didi getting what he assumed was her first kiss, a bashful union of lips made even more uncomfortable when Pete had leapt out and teased, “Slip her some tongue! She wants it bad!” As Didi wept in mortification to their mother, Dad had grounded him for it, but it was punishment meted out with a little, tolerant smile.

Careful. Pete cautioned himself not to render every memory sepia-toned. A lot unpleasant happened here, too: incendiary confrontations, illness without dignity, irreversible vows, and secret pacts.

Many homes had been repainted or altered, but a few he immediately recognized. That, over there, was the house with an endless supply of kids, a new baby always spitting up on the shoulder of the mother, exhausted and pale. The Hankins family, that was their name. He remembered building forts out of sofa and chair cushions in their house and how his own mother would peevishly shake her head as she pried: “Does Mrs. Hankins ever really pick up? Are there food crumbs everywhere?”

He came to the Blood Clot Badminton House, where the father of a childhood buddy, Marty, died of a cerebral aneurysm in front of the entire family, playing badminton. Swatting at a shuttlecock, he’d clutched his head and collapsed on their lawn. The wife, thinking it was a joke, kicked him in the ass. When he didn’t leap up and yell “fooled ‘ya!”, 911 was called. A defeated and slumped Marty returned to school, after being excused two weeks -- “with no homework,” it was announced by someone who claimed to know -- and Pete had envied him. He had already begun to hate his father for forcing him to bus tables at the Friendly and his antiquated rules, like always wearing a belt. A dead Dad didn’t seem such a heartbreak.

One more corner to turn, and he came upon a modest business district. Here had been, and still was, The Friendly’s chief competition -- always cordial, never a war -- Winky’s. He had taken a job there his junior year, saying it was walkable and that it paid better, but he’d done it mostly to stick it to his Dad. It had been owned by a lady known only to him as Mrs. Hasewinki, either majorly big or skinny, always losing, like, three hundred pounds at a time. The signage, repainted many times yet again peeling, betrayed older versions bleeding through, but still bore a Marilyn Monroe lookalike batting one massive false eyelash.

He crossed the intersection on red to Farraday’s. A car began honking and slowed. He lowered his head. Maybe it wasn’t even intended for him, but he wasn’t ready for a streetside lecture on being a scofflaw or jaywalking. Inside, he quickly found what he wanted and SKYY was on sale “if you’ve got a loyalty card,” the cashier told him.

When his credit card for the two half-gallons was declined, he produced another, hoping it too wouldn’t be handed back with a “got another one you wanna try?” The cashier probably heard his tiny, relieved exhale when the transaction was successful.

The walk back wasn’t as riveting. The plastic handle bag, bouncing against his hip, was heavy. He just wanted to have a screwdriver or four before Didi’s triumphant return from the lawyer. Of course their father’s will would favor her. She was the one who stayed, even before she moved in to care for him. She’d never left their hometown.

Retracing his steps, he saw a misshapen snowman, clinging to life, he hadn’t noticed before. The black pebbles for teeth shone in its diminished head. Pete admired its stick-to-itiveness. After all, he’d seen the same stubborn unwillingness to yield among his own tribe: flabby, pasty, skin tags, yet defiantly wriggling into a Speedo brief. Someone ought to put it Frosty out his misery. But it wasn’t going to be him who did it.

I know what it’s like to be kicked when you’re down, Pete thought.