This is the story of how Emery Walters became whom he was supposed to be.

I knew I was male at an early age, something that was a societal no-no in the 1950s and still is in parts of the country today. Burying my male identity, I strove to be the best woman possible. But after raising my four wonderful children from two debilitating marriages, I found myself alone and nearly penniless. That was when Emery asserted his identity.

Life became better with the shift from female to male, a third marriage, and a wife who, herself, transitioned from male to female. 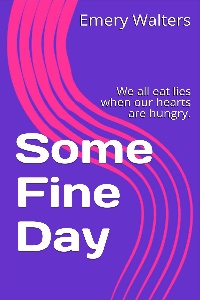 Oh shots! How can one think it’s easy before finding how many ways there are to actually screw things up? My first one found a vein. My second one I pushed the plunger before stabbing the needle in and the T went all over my leg, scaring the cat. The third time, I let Robyn have a go and she gave it such a good shove I was almost pinned to the chair! How many more mistakes can I make? (Hint: I lost count after the time the needle bounced back off my skin.)

And of all things to ‘forget’, my top surgery. The ‘bilateral mastectomy with reconstructive surgery’. The technical term being, of course, a hooteroffamy. I’d already decided not to have an addadictomy. For this event we went to Portland, Oregon, again, to Dr. Meltzer, who had previously done Robyn’s surgery. We liked him, we liked Portland, and it was the closest we could go, anyhow. I’m sure I was the bravest notquiteman you can imagine beforehand, and I sure hope so because I was the biggest sissy you could imagine, afterward. Just like that, a couple months on hormones and you’d have thought this surgery was a cold. You know how men are with colds. Yes, the very first of my many hilarious gender jokes that I have thought up since, as my IQ declines rapidly. (That’s another one.)

But oh those first few days in the hospital! Where was Robyn? (Out buying me gifts.) WHERE IS SHE? And the pain? Never in my life ... oh wait, yeah, childbirth, okay then. I laughed at Tylenol. When we went back to the hotel, I got stuck in the bathtub. The chest didn’t hurt as much as the two drain pipes he had installed in my armpits (we’ll skip over the part a few days later when he ripped them out forcibly with a huge pipe wrench; no I didn’t scream, men don’t scream, we bellow or roar. That’s different. But it was loud.)

All the staff at the hospital were wonderful, especially the one gay nurse. However, one night I was super in pain. Two AM, and I wrote: “Fat boy out there, I mean, the night nurse, said, when I stumbled my way down there, ‘Oh I was waiting for you to call for pain meds.’ What an asshole.” (Fixed him, didn’t I, calling him a name later.) Surgery meds do funny things to people. I’m not normally a rude guy. Well, I guess at that time, I’d have to wait and see if I was going to be a rude guy or not.