Becoming an immortal doesn’t solve your personal issues. That’s something Evanescence Lawrence, a recent phoenix (or so they tell her, she’s still trying to figure it out) is discovering, as she attends the yearly new years party for supernatural beings and witches.

While there, she meets a vampire named Vinnie, and the two hit it off despite their differences. Can Eva make her first non-human friend, or will her myriad of issues and the lack of control over her powers get the best of her? 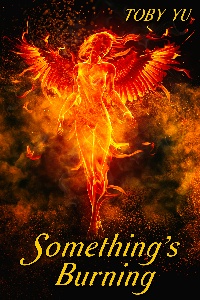 “Oh, don’t sulk like that. You’re cuter when you are pouting.”

I glared at her, blushing, as I tried to stammer some kind of response. “You haven’t even seen me pout!” I said, but she was laughing to herself.

“Normally I have to put effort into making girls blush, but good to see you take the initiative.” Vinnie smirked. I practically gave myself whiplash as I whipped around, miffed.

“H-hey! How was I --” I began, but stopped. She was grinning more than ever. Part of me was relieved that she didn’t take offence at my comment, but a lingering question sprouted in my mind.

Was she flirting with me?

I didn’t think so, but I couldn’t help but wonder.

“Well, you’re welcome. Hmph.” I crossed my arms, still to get my face to stop being as red as my flames.

“Blush any harder, girl, and you’re going to set my car on fire.”

I heard Vinnie’s boisterous laughter still echoing in my mind as I pressed my face against the car door. Why was I like this? I thought I had gotten more confident, but all I had managed to do was turn into an embarrassed wreck at the first cute girl who had a sense of humor.

Wait. Why did I smell burning plastic?

“Oh shit!” I gasped as I felt my cheeks melting through the car door. “Stop the car, stop the car!”

There was a sharp screech as Vinnie made a hard right, the sound of brakes grinding against each other as the car groaned to a halt. There was a jostle as her car bumped into the highway railings, barely stopping us from rolling off and into the fields below.

I had managed to melt through the top third of the car door, reducing the black plastic covering into slag. I tried to fan the smell of plastic away as the vampire rolled down the windows and turned on the emergency lights. I could see the metal portions of the car door underneath, warped and bent from my heated cheeks.

“This is troublesome.” Vinnie looked as calm as the moment I met her. “I’ve never met a girl who accidently commits pyromania upon teasing.”

“That’s what you have to say?!” I blurted out, my cheeks heating up again before she placed a hand on my shoulders.

“Calm your tits, girl. Let’s get you some cool air so you don’t accidently cause the entire car to explode.” She looked me dead in the eye as I nodded.

“Fine, but you’ll have to stop teasing me.”

Vinnie sighed as the two of us got out of the car, muttering something about how fate was cruel to her today. As she was accessing damages and airing out the car. I placed a hand on my cheeks.

I was really into it, huh.