Songs of Love and Hate (FF)

After two years hunched over her laptop at home, Deanna Spenser is finally back in the office, albeit only for three days a week, and predictably, she hates it. Driven by a deep desire for change, a yearning to not go back to the way things were before coronavirus, she finds herself consumed by memories of adolescence, of a friend lost to the past.

Abruptly, she is offered a chance to reconnect with her friend. Yet as the past opens up before her, she finds herself wondering if perhaps there are things that should not be revisited after all. 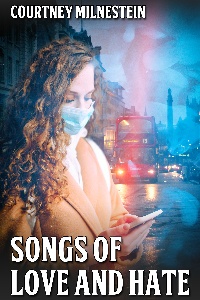 Songs of Love and Hate (FF)

Despite herself, and without really knowing why, she pushed against the door, the chime of an aged bell above her head resounding as she crossed the threshold and stepped inside, finding herself instantly confronted by the musty smell of age and decay, an impossible warmth in the air, as if someone had been running fan heathers for hours without thought of the dust that burnt silently with their innards.

She was greeted by silence, an absence of any kind of attendant or shop assistant, and in that moment, she allowed her eyes to wander, gazing out at the rows of shelves arranged like bookcases in a library, each wooden stratum filled with absurd trinkets, solemn masks cut from rubber and plastic, commemorating former American presidents, stained beetles cast from unknown metals, dog-eared tarot cards, and obsidian statuettes.

Around her, save for the rattle of fan heaters in another room, there was silence, a blanket of humid decay over her surroundings. She should leave, she told herself, yet the anxiety she had felt in the street had lessened in the mere moments in which she had been inside, and there was a small part of her that was loath to return to the outside world, to feel that claustrophobia and panic, the unhappiness that would haunt her back along the curve of the Northern Line all the way to Hendon Central. Instead, she took a step forward, as if confirming her resolve to remain within, to refuse to go back outside, the heel of her boot resounding amidst the sawdust upon the bare wooden boards of the floor. One step forward, she told herself again; a series of steps forward, a path that leads you towards a horizon you cannot fully see.

“Hello?” she called out, surprised by the sudden sound of her own voice. “Hello, is anyone in?”

Towards the back of the shop there was a counter and an ancient cast iron till covered in the same dust that fell over everything else in the shop. Behind that, a doorway, a bead curtain hiding the contents of the room beyond. To the left of the counter, there was another room, the door closed shut firmly, possibly a staircase that led upstairs to flats or a stock room, she imagined.

Atop the desk, situated directly before the doorway with the curtain, a tarnished silver bell languished, waiting for her to push her palm down against it.

Another step forward, a series of steps, she thought again, and she was suddenly before the counter, reaching out and --

From behind the bead curtain, a figure emerged, a thick, woollen scarf about the neck, its tail trawling amidst the dirt and sawdust, a slender frame naked save for the scarf and a battered leather jacket with a battered tin sheriff’s star, sickly green flesh covered in pale knotted hair and the occasional outcrop of thorns protruding from within and piercing the surface of the flesh.

She choked back an instinctive scream, her eyes grew wide at the sight of a creature so recognisably human shaped, yet so thoroughly inhuman.

“Welcome,” the creature said in a thin, reedy voice, fussing suddenly with the woollen scarf. “Cantrip greets you, Deanna Spenser, welcome to his humble shop.”

He stopped, regarding her for a moment, looking her up and down.

“Cantrip has been waiting for the longest time,” he added, almost as if admonishing her.

Deanna stood there, uncertain as to what to say, as to how to respond. She recognised that this was not a normal occurrence, that this was not an everyday event, yet the reality of it could not be disputed; this strange creature in his trailing scarf stood before her, addressed her by name, spoke to her as if he knew her, and here she was, standing on the other side of the counter amidst the must and dust, not knowing how to extricate herself from the situation.

His thorny hands shot forward and took hold of her own, and she all but screamed both from the surprise and the sudden contact, yet somehow managed to keep her feelings in check. His hands, she thought, as he roughly turned over her own hands, inspecting first the palms, and then her long fingers -- his hands were not like those of a normal person, but rather they felt like the knot of vines, the stems of flowers, soft, malleable, and she imagined that, if pricked, they might bleed sap.

“Aha, Cantrip has found it!” the curious little creature announced.

Before she could ask what exactly he had found, much to her horror, he was pulling on her ring finger, trying to wrench the band of silver up over the knuckle and set it free.

“Stop it, that hurts,” she protested, shaking free of his grasp, slapping the hands away when they again reached for her.

The creature, Cantrip she gathered, from the strange way in which he spoke in the third person and the amount of times he said the word, seemed sorely displeased.

She looked down at the ring, cheap silver, not even actual silver, just polished metal, a trinket from some stand in the Stables on Chalk Farm Road.