The sound of the bathroom tap running late one night begins a mystery Devon is keen to solve. As small pieces of the puzzle are revealed, such as the man he discovers sitting on his couch in his house watching his television, he begins to wonder whether something paranormal isn’t going on. However, having been in a bad motorcycle accident a few months earlier, Devon cannot be sure these things he’s experiencing aren’t hallucinations caused by brain damage sustained in the tragedy.

On the other hand, he’s more than a little taken by his hot new house guest, Brad, who is the epitome of manliness. Thick, muscular, hairy, and masculine. But his hotness doesn’t quite detract from the mystery of what he’s doing in Devon’s house, and since there’s no way of communicating with a spirit, Devon decides that, as Brad isn’t a malevolent ghost, there’s no reason he should be worried. Or even try to stop himself from falling love.

Then a knock at the front door threatens to spoil everything. Unfortunately for Devon, there’s even worse to come. He has proven his ability to survive a motorbike accident, but has he got what it takes to survive what happens next? 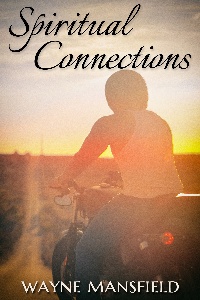 Over the following days and nights, Devon could feel himself falling slowly in love with the handsome, masculine spirit who had decided to make himself comfortable in Devon’s house.

Any time Brad stepped into the shower, Devon made sure he was there to witness that first trickle of water that wound its way down the smooth, tanned flesh of Brad’s back, almost losing momentum as it reached the patch of dark hair in the small of his back. Then, as more and more water washed down over his back, the original trickle suddenly regained momentum and wove a path to the top of his hairy arse crack. In the blink of an eye, it would disappear, washed away by the cascade of water washing down over him.

But he also noticed that often, when Brad turned around to face him, his cock would be a little fatter, a little larger than usual, and Devon wondered if the spirit could see him, or at least feel his presence. Was the fact he was being watched, turning him on?

The thought that it might be goaded Devon on. As Brad ran the bar of fragrant soap over his body, Devon began rubbing himself through his pants, massaging the bulge of his cock with the heel of his hand. How good it felt to feel those sensations again after such a long time of not feeling them.

Brad bent over to wash his feet and calves, affording Devon a quick peek at the dark hole that was usually hidden by the twin mounds of Brad’s muscular gluteal muscles. At one stage the buttocks spread a little wider, affording Devon a glimpse of the deep pink rosebud amidst the dark hair. Immediately, he climaxed. Closing his eyes as each contraction shot another load into his underpants, he was imagining what that hidden bud would smell like? Would taste like? As the warm seed spread across the top of his thigh, he sighed as two or three post-climax spasms sent warm waves of ecstasy spearing through his abdomen.

The sound of the shower being turned off snatched his attention away from his post-climax bliss, and he scampered away to the kitchen.

Leaning on the kitchen sink, he looked out at the back yard. The lawn needed mowing, and the garden could do with some trimming. He made a mental note to carry out those chores the next time Brad disappeared, as he was apt to do for the majority of most days.

It would do him some good to get out in the sunlight; to let its Vitamin D-filled rays bathe his skin. Through a combination of COVID lockdowns, work from home, the accident and his long recovery, it seemed an eternity since he’d been outside. And with supermarket, restaurant and bottle shop home deliveries, it seemed the 21st Century had made leaving one’s house redundant.

He heard a noise behind him, and as he turned, he felt Brad step into the space behind the kitchen sink he was occupying. It was only for as long as it took to blink an eye before Brad jumped back, his eyes wide and his expression one of utter confusion. Yet for Devon it felt like minutes.

For that split second, Devon had felt Brad’s essence. No, more than that. He had felt what it was like to actually be Brad. He had experienced the strength, the heaviness of Brad’s muscular bulk, and the masculine scent of his body. He knew the tightness of the fabric of Brad’s jeans across his firm buttocks, and the slight discomfort of his large cock and balls being confined in the small space within his underpants.

As Brad stood barely inches behind him, his right hand running the length of his left arm as he wondered what he had just experienced, Devon shuddered. The spirit had been inside him, had entered him completely. The thought was sending tingles up and down his spine, and when he looked back at Brad, Brad was looking at him.

He was staring in disbelief. Slowly, and with great trepidation, he began to extend his right arm, moving it cautiously towards Devon, who leaned slowly to one side so the spirit hand would not make contact. Nevertheless, he was sure that the ghost of Handsome Brad, was at last, truly aware that he was not alone in this space he had for some reason decided to occupy.