Bill Grissom, seventeen, doesn’t have long to live, and when he’s given a second chance as a substitute for his counterpart in a parallel universe, he jumps at the chance to become the Golden Guardsman.

Things go well at first. Along with Veil—Charlene Thompson, Matter-Man—Anders Nixon, and Monolith—Martin Bollock, the other members of the group, they dispense justice wherever it’s needed.

However, Matter-Man’s insistence on getting paid for a job well done doesn’t sit well with Bill, and he becomes jaded and cynical about working for the Collective. To Matter-Man, and to the other members of the group, it’s all about the coin.

As well, more and more super-criminals start to appear, and when Bill discovers who’s coming and more importantly, why, he learns that being a hero involves more than simply dispensing justice. It’s all about living up to the ideals of being one—something that could cost him his life. 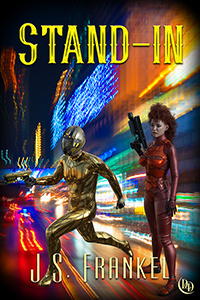 The shots echoed through the air, sharp, pinging sounds that signaled something bad was happening. Going in for a closer look, yup, just my luck to happen upon a robbery. Couldn’t this guy wait until I’d gotten a soda?

No, he couldn’t, and the crook emerged from the bank, money bags in his hands. He spotted me, and I uttered my line, the corny, clichéd line which everyone had come to know so well these past few months. “Stand down before you go down, Preyer!”

The crowd let out a collective gasp. They’d been waiting for a show. Wasn’t television enough for them? If any justice in this world existed, they’d have given me ten minutes to relax…but no. The criminal elements never stood still. In spite of my best efforts, Gen City was still one of the most crime-ridden cities on the eastern seaboard.

Everyone scattered like quail when Preyer advanced on them, waving his weaponry around.

Dressed in his light green bodysuit, he wore artificial claws shaped like a praying mantis’ and used them to emit high-energy laser bursts. He stood only five-six, but his firepower made him a giant.

“People, for your own safety, stay back!” one of the cops yelled. The regular police couldn’t match what he brought to the table, so they called on me to handle their dirty work. Handling dirty work came with the territory of me being what I was.

In fact, twenty cops had already come around, hanging well back of the action. One of them came over to me during my initial assessment of the situation with an apologetic look on his face. “Uh, Golden Guardsman, sir, we’re a little out of our league here. Would you mind…”

Overweight and pasty-faced, he probably had trouble stopping tykes from stealing building blocks. Inwardly sighing at the fact my downtime had been turned into no-downtime, I smiled at the policeman in order to reassure him.

“I’ll handle it, but could you keep everyone back, please? I don’t want anyone getting hurt.”

He and his fellow officers hustled over to the group of two hundred or so gawkers, and they did their best to get them out of harm’s way. GG, he called me, and I wished they wouldn’t use my nickname. It had never really thrilled me…but once again, it came with the territory.

While the cops did their job, the technologically amped-up lawbreaker snatched up a mother and her little boy who’d lagged behind. It was a pretty despicable move, but it happened to be his modus operandi.

He always scoped out a bank, went in laser guns blazing, and took two hostages as human shields—never one or three or four—and then threatened to kill them if his demands weren’t met.

My temples began pounding. Aw, crap, the headaches would have to come now, just when justice had to be served. On my own pain tolerance scale, this registered a seven.

Ones to sixes, I could deal with, as they simply caused a pulsing behind my eyes and a throbbing in my skull. Sevens, though, made me sick to my stomach and caused my vision to blur. Still, I had the ability to do what needed to be done.

That comment came from Molly Minter, a reporter. I could always tell her voice, loud and screechy, like long nails raking a blackboard.

Oh, yes, don’t forget about the press. They surged forward and begged me for the obligatory grab-shot, a picture of me in a heroic pose belting out the criminal. Said picture would soon be on the front of every paper and all across the internet.

Molly, a short, plain-looking, chubby lady with pasty white skin and a pushy attitude, gave me a thumbs-up sign. She and I had a deal. She never asked anything personal, in sharp contrast to the other reporters who wanted to know everything about me.

She signaled her cameraman to get ready. My attention turned to the man with hostages in hand. “Eugene,” I called out. “You don’t have to do this.”

Preyer, whose real name was Eugene Twilliam, let loose a shot from his laser pistol in my direction and then screamed, “Call me Preyer!”

The discharge bounced harmlessly off my chest and dissipated in the warm June sunshine. He fired again and again and then realizing his weapon didn’t work, took out a regular handgun and pointed it at the head of one of his hostages.

His hands shook from drug usage, which made him even more dangerous. “Better back off, hero,” he yelled. “I’ll do it. You know I will!”

The crowd broke into long, sustained laughter, because they knew what would happen next. They wanted action, a show, and they knew I’d provide the fireworks.

Eugene looked around, saw that no one was scared, and went bonkers, screaming, “My name is Preyer!”

Yep, time to close this down. All of this could have been avoided, but now, there wasn’t time to tell him that breaking the law wasn’t the smartest option around. I used my eyebeams to freeze his mouth and nostrils shut. Pretty cool beans right there.

My powers didn’t include laser vision, but my eyes had the ability to fire a below-zero ice-cold burst which could stop anything in its path.

The crook immediately let loose a muffled howl, dropped his weapon, and clutched at his face. The hostages made their escape, and I strode over to where the now-chilled crook stood holding his frozen gob. “Eugene, you know what you did was wrong, don’t you?”

He nodded, his fingers trying to crack the ice.

“You know I didn’t really want this situation to end this way, right?”