In 1955, Sam Coles is Hollywood's newest rising star, and his latest role promises to send his popularity into the stratosphere. But Sam is less interested in the potential boost to his career, and more interested in his gorgeous co-star, Hollywood's latest bad boy Elijah McKinley.

Their careers rely on discretion, but Sam and Elijah cannot deny the desire between them. Stealing glances and casual touches between takes soon gives way to heated kisses and clandestine meetings after shooting.

But neither of them knows what will happen when filming wraps and their lives move in separate directions ... 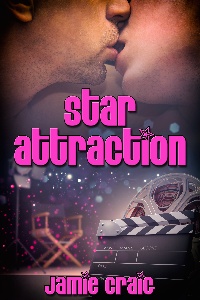 "I wish we had time to do a run through of the scene before shooting starts. I have to do more talking today than any other time in my career."

"You worry too much. Just focus on the moment, and you'll be fine."

Elijah worried more about this shoot than any of his other pictures, but that was because of Sam. Sam was good. Not kind of good. Not pretty good. But good good. The sort of good that could raise the quality of performance in his co-stars, if his co-stars were up to the challenge.

"I'm right." He offered a shy smile before his lashes ducked. "I wouldn't steer you wrong, Eli."

Elijah tilted his head. "Did you just call me Eli?"

In the murky soundstage, it was hard to be certain, but it looked like there was a distinct flush creeping up the back of Sam's neck. "Yeah. Sorry. I have a habit of shortening names if I can."

"No, don't apologize. I like it. Elijah can be quite a mouthful. Especially if your mind is on other things."

His color deepened, though Sam stopped hiding away in embarrassment and looked up again. It really was no wonder the teenybopper mags splashed his picture everywhere. With his flawless bone structure and the cleft in his chin, he had a face that begged to be admired. But it was the casual disarray of his sun-streaked hair and the laughing pale eyes that made him human. More than human.

"And here I thought we were consummate professionals," he joked. "You wouldn't be suggesting my mind would be anywhere but our work, would you?"

"Oh, never." He licked a drop of coffee from the corner of his mouth, and reached for a pastry. "In fact, my mind is always on our...work. I've been looking forward to today's shoot all week."

There was no missing the way Sam tracked his hand, following it to Elijah's mouth as he bit into the cruller. "Today's where we earn our paychecks. If we nail the fight scene, the rest will be a cake walk."

"But the fight scene is the last thing on the schedule. Nothing like doing one of the most emotionally draining moments in the script at the end of the day." His tongue darted out to catch a crumb on his lip. Sam followed the motion, and Elijah was tempted to do it again. "Fortunately, I'll have you to get me through it."

His mouth twitched. "If you expect me to feed you your lines, you're out of luck."

"Darn. I'll just have to feed off your energy ... and hope the chemistry is there."

"Gordon wouldn't have cast you if he didn't think we had chemistry."

"What do you think?"

Sam blinked. "Do I think we have chemistry?"

"Yes. I know we've only been in front of the camera together once, but I think the screen test was enough to get an idea."

"More than enough." Sam looked away, watching the crew mount the lights above the bedroom set where all the scenes were being shot that day. A faraway look came to his eye, and Elijah wondered where exactly his thoughts were straying. "Honestly? I think this is going to be the best stuff in the whole movie. Nobody's going to be able to take their eyes off you, Eli."

Elijah was going to do his best, and the script did play to his strengths, but he wasn't going to try to upstage Sam -- who did have top billing, along with Eva. "I'm only ever as good as my partner. And you're a great one."

Sam smiled, though he didn't turn back to Elijah so he wasn't sure it was aimed at him in particular or one of those enigmatic smiles he was always catching on the man. "I've wanted this nearly all my life. And I thought when I got my first movie role that I'd made it. But I'm beginning to think that it's going to be this picture that changes everything for me."

"I think it's going to change everything for both of us."

Elijah offered a lopsided grin that was nothing like the indifferent sneer he usually wore in front of the camera. "I'll buy you a drink for every line I miss."

"Make it two. I read how much you got paid for your last movie. You need more incentive not to screw up."

He set the empty cup down and offered his hand. "Deal."