College student and football star Zeke Mitchell hasn't been home since he entered the university two years ago. His hometown only serves to remind him of a boy he loves whom he can never have. If not for his estranged mother who suddenly wants to spend the summer with him, Zeke would never think of going back.

The life of Nate Abraham, the boy Zeke loves, is not a walk in the park. Known as a hero in the past, he’s accused of being delusional and living in a fantasy world now.

Can Zeke find and save him before everything is too late? 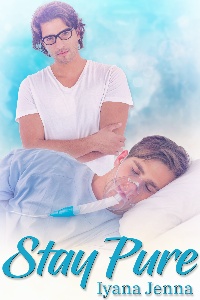 Three guys of his age were crowding on Nate's side of the car and Zeke caught some words one of them said, "Hey baby, where's your mommy?"

Nate was nineteen too, like him, but Zeke had to agree. He didn't look a day older than when he was fifteen.

Zeke wasn't sure if Nate could hear anything through the closed windows but the wild, panicked glare in his eyes was enough to make Zeke blow up.

"Get away from him! What have you done? Go!"

Whistles and catcalls greeted him. "Ooh, it's not a mommy. Here comes the daddy."

Zeke held the paper bag containing their meals in a tight grip. He had to remember what he had in there or he'd crumple it and smack it to the man's face. "Get lost now or I swear to God --"

"What you gonna do to me, huh, faggot? Just go to your boy toy right there and stick your -- ugh -- into his ass." The man made such an offensive gesture Zeke jumped in his face, his right hand poised to deliver a blow to the man's nose.

Pairs of hands jumped and held him back, but even they wouldn't be able to stop Zeke from cracking the man's bones if not for Nate screaming his name.

Right now it was the most beautiful sound he'd ever heard. Zeke struggled against the grips and sought after Nate. And he saw him, standing next to the car, hands tight into fists, his face and posture reminding Zeke of an angry bitch protective of her puppies.

Or someone whose friends were threatened by a pack of werewolves. Zeke's heart pounded in his chest as he felt giggles bubble up in joy and delight. He didn't care anymore of their attackers.

The man before Zeke contorted his face. He squeezed Zeke's jaw and snapped it away. "You disgust me, you know that? And that little boyfriend of yours. Get lost, before I call my friends. I know they're going to love Nate, too." He nodded at his pals. "Let him go. They're not worth it."

Might as well, Zeke thought. But he didn't say anything anymore. He dashed to Nate once they let go of his arms, and grabbed the boy's face. "Nate, are you all right? Talk to me again, please."

Zeke nearly sobbed. He cupped Nate's cheeks, drank in the sight of his eyes, his lips, his smile, his expression that was practically dead the past hours Zeke was with him. "Oh, Nate. Nate ..." Then he did something unthinkable even for himself. He leaned in and kissed Nate's mouth. It lasted only several seconds but Zeke savored the moments. Nate's lips were soft and pliable, just like what he'd thought they would be.