It's 1953, and the golden age of Hollywood musicals. Paul Dunham couldn't be hotter on the dancefloor or the silver screen. Hoping to capitalize on Paul's popularity, the studio pairs him with up-and-comer Jack Wells.

On the marquee, it's a match made in heaven, but for Paul, it's a personal hell. He hates Jack's newfangled acting style, and he hates Jack's blue eyes, and he especially hates the fact that Jack is one of the most talented dancers he has ever met.

Jack, however, doesn't hate Paul. In fact, everything Paul does fascinates him. After their first meeting, Jack is determined to win Paul over, and he won't back down until Paul admits the two of them are perfect partners ... in every way. 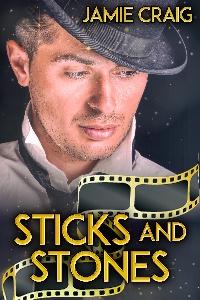 Martin hovered in the doorway, a shadow against the darkened hallway. "Don't worry, Paul. I'll make sure you don't have to worry about him."

"Thanks. I ... I know you will." Martin disappeared and Paul turned back to Jack's sprawled figure. With a soft sigh, he began untying his shoes. Jack didn't even move as Paul removed his shoes, and then his socks. "You still awake?"

"'Course not. You only ever touch me like this when I'm dreaming."

"You dream about me taking off your shoes? Do you have a thing for feet?"

"No, just getting naked with you, you git." He sighed, his arm flopping out to the side. He missed touching Paul by inches, though with the flex of his fingers back and forth, Paul wasn't so sure Jack realized he hadn't made contact. "But you start with my shoes. 'Cause we always dance first."

A few of Paul's dreams had started in the same place. The two of them in perfect rhythm as they moved across an endless dance floor. "What happens after I take off your shoes?"

"I get to strip you down." His hands stroked the air, more graceful than Paul had ever seen. His voice was slowing with every word. He wasn't going to stay awake for much longer. "No more secrets, no more lies."

"That sounds like a nice dream," Paul murmured, shifting his attention to Jack's shirt. He unbuttoned it quickly, his nimble fingers leaving the shirt hanging open. "But wouldn't that take all the mystery out of things?"

"Is that what you want? Mystery?"

"No, actually, I don't." He pulled Jack into a sitting position and quickly pushed the material off his shoulders. Jack cooperated without opening his eyes, and soon his shirt joined his shoes. He wore a white undershirt, but Paul could see Jack's nipples through the thin material. It was probably best if he didn't try to remove his pants. "Don't try to run away in the morning. It'll be best to stay here and keep low, okay?"

"Stay low and keep here. Got it." When Paul tried to straighten, Jack's arm shot up, his hand clamping around the back of Paul's neck. His eyes opened, their depths unfathomable. "You don't owe me anything. Know that. Know getting this gig was a spot of luck. Won't let you down."

"Jack ..." He brushed a strand of blond hair from Jack's cheek, his voice dropping to match Jack's tone. "You got this gig because the man who runs MGM knows talent when he sees it. You need to worry about not letting yourself down. This is going to be your big shot if you don't blow it."

"Mean blow it by blowing you?" The unexpected joke startled him enough to not resist when Jack pulled him down. Then, Jack's mouth slanted over his, warm and slightly sour and inviting Paul to take everything he wanted.

For a moment, Paul forgot every reason why he should not push his tongue into Jack's mouth. He forgot about how difficult it was to keep Jack at arm's distance. He forgot that Martin could walk in any second and catch them together. His cock hardened, and the more he tasted Jack, the hungrier he became. He imagined himself crawling into bed with Jack, kissing him until the sun finally came up, and then exploring the rest of Jack's body. Especially since Jack's mouth was hot, and he tasted of the whiskey he had been drinking all night.

Jack moved, as if he could read Paul's mind, trying to pull him closer. That snapped Paul out of his fantasy world, but he couldn't quite bring himself to end the kiss. He broke away gradually, clinging to the taste of Jack's lips for as long as he could before lifting his head.

"Yeah, that would be one way to blow it." Paul disengaged himself and straightened. "You got to be careful."

Jack's arm fell to his side. His lazy smile was one of the most genuine Paul had ever seen. "Always, mate."