Stones in the Road (MM)

When his snobbish future in-laws travel all the way from Boston to visit, wise-cracking Southerner Wiley Cantrell learns gay marriage is not without its disadvantages. He’s preoccupied by concerns over the health of his special needs son Noah, a meth baby who was not expected to live yet is now on the cusp of puberty, and the antics of Wiley's outrageous would-be mother-in-law and severely conservative father-in-law strain his relationship with Jackson Ledbetter, a pediatric nurse who poses problems of his own. As their respective families meet and greet, each just as meddlesome and inflexible as the other, North meets South and the fireworks and cultural misunderstandings are plenty.

Then a tornado blows through the small Mississippi town where Wiley's mother lives, wrecking his mother's house and leaving their lives in disarray. And Jackson's secret drug addiction comes to light, devastating Wiley and Noah. With so many stones in the road, Wiley and Jackson find their dream of becoming a real family falling apart. Though Wiley relies on humor to cope, he'll need something more to keep his happily ever after from slipping away. 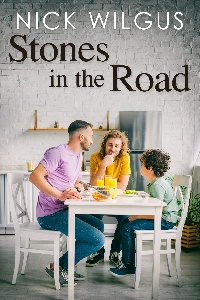 Stones in the Road (MM)

Jackson Ledbetter was on the floor during nude push-ups when I woke the follow morning. There are worse things to wake up to on a Thursday, his mother and father springing immediately to mind. He went about his push-ups with deadly earnest. A gym monkey who reserved most of his exertions for the treadmill or the pool, he had enticed Noah and I to join him on some of his morning runs. When he added more exercise on top of his usual routine, like these push-ups, I knew he was struggling with his inner demons.

"You forgot to mention your folks are possessed by Satan," I said, my eyes raking over his body with obvious desire. "But what's a little psychosis among friends?"

"Preparing the way for the Antichrist, are they?"

"Making the world safe for ax murderers and rape gangs?"

"There's nothing wrong with them that can't be fixed with a chain saw and a bathtub full of hydrochloric acid. Just ask my Uncle Jerry. Ooops. Sorry. You can't!"

"A shotgun would be faster, but it makes a hell of a mess."

Obediently, he padded across the carpet and stood before me. I put my hands on his hips. "Wanna fool around?"

"Now that's why you don't get invited to the really cool parties."

"They will only be here a month," I said, neglecting to mention that those thirty-one days stretched out like a small eternity that could only end in bloodshed. This was, after all, the South, and it don't take too much Yankee nonsense to start a war.

"They're not usually this bad," he replied. "I don't know what's gotten into my mom. She can be very mean when she wants to be, but she's never talked to any of my friends the way she talked to you. What she said about Noah ..."

"Reminds me of the times when I'd bring a puppy home or something. She'd get so mad and say so many bad things, trying to get me to give the puppy away, but after a while she would get so attached, and she'd act like she never said any of those things."

"I'm sorry about what she said about Noah. Actually, I think she likes him."

"Could have fooled me."

"How do you feel about Jackie-boy?"

"I'm not kidding, Clarence!" he exclaimed.

"I don't know how we're going to get through this."

"One day at a time. Worrying doesn't help."

The door to the bedroom opened suddenly and Noah appeared, a look of worry in his eyes. He was dressed in underpants, and I got a whiff of urine.

"I wish he'd learn to knock," Jackson muttered as he grabbed the end of the sheet to cover his privates.