Twenty-one-year-old Ernie isn't prudish about wearing his sexy Spiderman costume that leaves little to the imagination. After all, he's ready for some spicy action as his Halloween treat. Granted, he'd still prefer having a boyfriend over a meaningless hookup, even though he's never known what love is, but his exes turned out to be a waste of his time. He's been leaning toward older men these days because guys his age never seem to know what they want. Still, a little fun along the way wouldn't hurt, would it?

Enter twenty-nine-year-old Logan, a hookup who's more beautiful and irresistible than any man Ernie has ever met, perfect for a Halloween treat. But after an awkward misunderstanding, Logan turns out to be asexual, and he isn't so easy to get in bed with. So much for a spicy treat! In fact, a big part of his romantic past still surrounds him and Ernie when they meet for the first time, and it's impossible to avoid. While not all asexual people are against having sex, Logan still has his limits and won't do all the things Ernie finds more pleasurable. Logan may not find anyone sexually attractive, but he has a big heart to offer as a sweeter kind of treat.

This unexpected new experience confuses Ernie as he gets to know Logan some more. He's used to only one way to love a man, or in his personal experience, no way at all. Being around Logan can be a challenge for both Ernie's heart and body. Can he look past Logan's limits and give this sweet treat a chance? Is there something deeper than anything Ernie's ever felt? 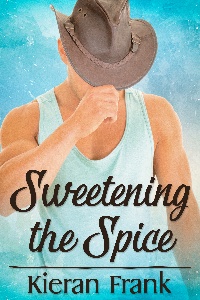 As I took off, I sighed. Another night, another meaningless hookup. Truthfully, being in the mood for action, I wanted a boyfriend instead. But no one wanted love anymore. The whole "monogamy isn't natural" push was pretty much on most guys' minds, and it was here to stay. I was getting tired of dating guys my age. They didn't seem to want anything serious since they were still exploring their options. I couldn't blame them since anyone my age didn't need to be tied down. But I wasn't just anyone. My romance-hungry mind spoke for itself.

And then, there was dating older men. I had to admit I found them more appealing, as long as they weren't too much older. Maybe it was the maturity and life experience. While I'd never dated an older man, being with one had turned me on a little more than with a guy my own age. Why was that? I couldn't figure it out.

Sadly, the ones I usually attracted were on the creepy side, the ones who wanted a "son" instead of simply a younger lover. No, thanks! I wasn't looking for a daddy since I had my own I barely talked to. And the best men were always out of state or overseas. Go figure. Most older men, however, seemed to want only guys under thirty. Why was youth so important? Why did it matter enough to where guys my age were on the verge of expiring once we got a little older?

A half hour farther west toward the Michigan/Wisconsin border, I drove through the gravel road of a rural neighborhood until my GPS led me to the man's house. I pulled into his tire-tracked driveway and stopped right behind what was presumably his dark pickup truck. Through my headlights, it looked decent, but it probably wasn't a new model.

I got out and briskly walked toward the front door, shivering again. From what I could see through the porch light, the little house wasn't too bad. The vertical siding looked outdated and worn. Then again, we'd just hook up and be done with it. What did it matter?

I knocked on the door, and it quickly opened like the man had been anxiously waiting for me. The brightly-lit living room revealed a face hotter than I'd imagine. What a tall hottie with a cowboy hat and sexy, blond scruff in a The Bachelor: Countryfolk Edition kind of way. His warm, blue eyes held me in a tight gaze as if trying to get me to fall fast. Or maybe he was just that beautiful to me. He didn't even look twenty-nine! Graceful aging?

I raised my pumpkin treat bucket and smiled. "Trick or treat!" I singsonged in a flirty tone.

A toothy smile spanned his lips, a hot and sexy kind of smile that immediately tingled my insides. "Hey, there. You're very handsome." Even his soft voice had the kind of masculine depth that knocked me out with a wave of lust.

Another smile, another tingly woosh inside my body. "Come in," he said in a tone that didn't match mine like it should. He wanted me, didn't he? Of course he did. Wasn't that the point?

I entered his humble home, still carrying my bucket, and the heated living room immediately calmed my shivers. But my eyes widened as I glanced around me. Had I just walked into an episode of "Hoarders?" Clothes, books, folders, and other junk surrounded me in boxed piles, some nearly touching the ceiling. Even the nauseating stench of oldness and dust started getting to me. My mood sank, and my arousal dwindled. Where would we sit and talk as a warmup?

He closed the door and sighed. "I know what you must be thinking, and I hope you won't be chased away by any of this like all the others I meet. It actually used to be worse before I started therapy, and I've gotten a lot better over time. It's all organized now. It's just packed in here, that's all."

Oh. Well, this was awkward. It was supposed to be a comfortable hookup. What now?