Take a Bullet for You

Paul Rosen, seventeen, has led a short and unfulfilling life. Stricken with severe cardiomyopathy, his time is limited, and he knows it. Still, he does what he can in the time he’s got.

The course of his life changes when a little man named Cawthorne shoots him in the chest. In the hospital, Paul learns that a phantom bullet is circling his heart. Modern surgery can’t help, and what’s worse, Paul becomes a target of insect-like aliens, led by a thing called Sagras.

The CIA then steps in, wanting the secrets of the aliens. Danger, thrills, and mayhem ensue, and finally, Paul, aware that his time is short, decides to go after Sagras and settle the matter once and for all—even if it costs Paul his life. 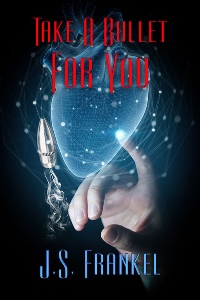 Take a Bullet for You

Linda’s question hit my ears, but it didn’t really register. I was too busy doing my own physical assessment. It was a warm summer night, perhaps seventy-five degrees Fahrenheit, and if I’d been normal, it would have been the ideal time to kick back, listen in on the world, and enjoy the positive vibes of an evening spent with a good friend.

Unfortunately, I wasn’t normal. Everything centered on my well-being and getting feedback of my own condition. Breathing came first—concentrate on that. Breathe as deeply as possible. That, I could do.

Next, take my pulse. Not good. It was one-eighty-four, fast but steady. I’d make it.

On second thought, change that to maybe. That was what I always thought on the rare occasions I went out for a walk. Other people thought about getting harassed or mugged. I had to worry about dropping dead suddenly. Heart cases like me always did.

My classmate, friend, and neighbor, Linda McNair, repeated the question. This time, my answer came immediately. It was a lie, but at that moment, I’d have said anything to stick around her a few minutes longer. “Not really.”

“We should. Your condition—you need your rest.”

She knew. Of course, she knew. I took my pulse again—same result—and then decided the hell with it. We were close to my house, close enough, anyway.

“Paul, we really should go.”

Her voice, as soft as silk, caressed me as we walked along the quiet streets. A cool wind blew, but while it also caressed me, it wasn’t quite as pleasant, although it wasn’t unwelcome. It made me more alert, and after being stuck inside my house all day, it was a definite and positive change.

Only a few people were out, most of them taking in the beautiful night scenery before returning home. Linda and I had gone to Corn Park in order to watch our annual fireworks show.

During the show, we’d stood a socially safe distance from everyone else, watching the various colored pinwheels and waterfalls and more explode in the sky. Every firework launched was even more beautiful than the last, and the crowd oohed and aahed with the eruptions of sound and color and light.

It was breathtaking, and the fact that I was with someone I liked made it even better. That made all the difference in the world.

However, all good things had to come to an end. The show had finished a few minutes ago, and, reluctantly, I agreed that we should make our way back. Bellingham, with a population about a hundred thousand, was popular with tourists. As the county seat of Whatcom County, it had a lot of nature, trendy bars, and restaurants. It was a fun place to live.

Correction—it was fun for those who had something to look forward to, and…

“Home,” Linda reminded me for perhaps the third time, gently nudging my sunken ribcage with her elbow.

Right, home, a place with an emotionally distant stepfather, a place that reminded me of how out of place I was. I hadn’t felt comfortable there for the longest time.

Linda’s statement put everything in perspective. She and Carl Millard were the only two friends I had at Bellingham State High, the best high school in my city. Carl was cool, always in an upbeat mood, but he had a date with his girlfriend, and I preferred hanging out with Linda.

We lived in a suburb called Dewey, fairly close to Bellingham airport. Linda lived two doors over, while Carl lived a couple of minutes away on foot. And we’d just seen that show at Corn Park, a place we could reach in about twenty minutes if we hoofed it over at high speed.

Corn Park happened to be the most popular park around, a family-friendly place in the daytime where families had picnics and played in the large forest it boasted and often got lost there.

It was slightly less family-friendly at night due to some teens making out there—or so I’d heard. In a suburb like mine, rumors traveled fast, and some of the guys at school bragged about having their first conquest there. More often than not, it was total crap, but at the same time, I couldn’t discount it happening.

Unfortunately, the make-out thing hadn’t happened to me so far, nor would it. I had to find a girlfriend first, and Linda was the closest thing to having one. For me, that is. I’d never had one, and at seventeen, time was running short.

That may have sounded funny for someone who didn’t know the details, but as cliched as it was, it happened to be true.

I’d developed a condition in my early teens that caused my heart to beat abnormally fast, fast as in one-hundred-eighty-something beats a minute on average. Sometimes, it was lower, sometimes higher, but it was never in the eighty to hundred BPM range. It never would be.

Hence, I was constantly taking my pulse, concentrating on breathing slowly and deeply, and trying not to worry about what might happen.

My breath was always shallow, and my endurance, almost nil. It wasn’t only the SA nerve—the nerve that controlled the electrical impulses that kept the heart beating—that was the culprit. It was everything else.

Heart damage sucked. If someone heard the terms heart disease or heart damage, they usually associated it with someone in their forties and beyond, someone who’d been a heavy smoker or drinker or both, or someone who was severely overweight or who’d abused themselves with drugs, but almost never anyone younger.